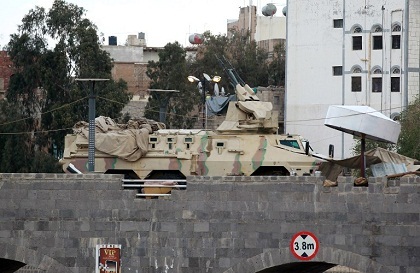 A new U.N. envoy was looking to kickstart peace talks in Yemen as battles raged Sunday between Iran-backed rebels and pro-government forces a month after the launch of Saudi-led air strikes.

The Shiite Huthi rebels, who have overrun large parts of the country and forced President Abedrabbo Mansour Hadi to flee abroad, have demanded an end to the air war as a condition for U.N.-sponsored talks.

But the raids continued on Sunday, hitting the rebel-held presidential palace in Sanaa and anti-government positions in the main southern city of Aden, military sources and witnesses said.

Fighting also intensified in Marib province, east of the capital, where Sunni tribes and pro-Hadi fighters clashed with Huthis and allied forces.

A military official said the presidential complex in Sanaa was targeted as reinforcements were being prepared to send to oil-rich Marib.

Ould Cheikh Ahmed "will work closely with the members of the United Nations Security Council, the Gulf Cooperation Council, governments in the region and other partners," a U.N. statement said.

Former strongman Ali Abdullah Saleh, who still holds sway over army units allied with the Shiite rebels, late Friday urged the Huthis to heed U.N. demands to withdraw from territory they have seized.

But Mohammed al-Bukhaiti, a member of the Huthis' political bureau, told AFP on Sunday that "dialogue cannot resume before the end of external aggression."

The fighting has raised fears Yemen could become a front in a proxy war between Sunni-ruled Gulf monarchies and Shiite Iran.

Tehran rejects accusations it armed the rebels and has presented a peace plan to the U.N. calling for a ceasefire and the formation of a unity government.

A U.S. aircraft carrier headed to Yemeni waters last week to monitor an Iranian convoy that had raised suspicions. It redeployed on Friday after the convoy turned back, Pentagon officials said.

The coalition has kept up air strikes days after announcing its campaign was entering a new phase aimed at resuming the political process, delivering aid and fighting "terrorism."

Marib has been the scene of days of deadly clashes between rebels and fighters loyal to Hadi.

The 435-kilometer (270-mile) pipeline links Marib's Safir oilfields with the Ras Isa terminal on the Red Sea coast, and control of it has been a key goal for the rebels and their allies.

Tribal sources said 90 rebels were killed in clashes and air strikes in Marib. Eight pro-Hadi fighters were also killed in fighting, they said.

AFP could not independently verify the death toll.

In other fighting, officials in Taez southwest of Sanaa said intense clashes had caused casualties, among them civilians.

Rebels fired mortar rounds at a public hospital in Taez, including at its intensive care unit, employees said.

Loud explosions were heard across the city, residents said.

In the southern city of Daleh, coalition aircraft dropped medical aid to pro-Hadi fighters after the rebels prevented a humanitarian convoy from delivering aid, officials said.

The United Nations says millions of people have been affected by the conflict and are struggling to access health care, water, food and fuel.

It estimates that at least 551 of those killed since late March were civilians, including at least 115 children.

the huthis killed the majority of these civilians.