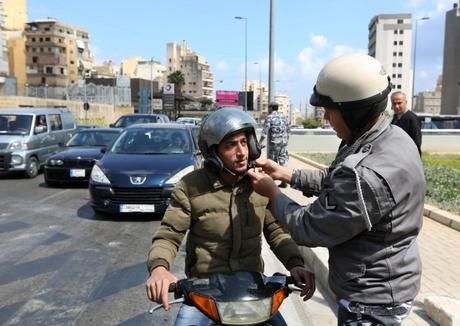 The Internal Security Forces announced on Thursday that the second phase of the implementation of the new traffic law will begin on Friday.

It said in a statement that fines will be issued against a number of violations that were not included in the first phase of the law.

The violations encompassed in the second phase are: failure to wear the seat belt in the driver and passenger seats, failure of motorcyclists to wear a helmet, crossing a red light, driving against traffic, using mobile phones while driving, double-parking in a manner that hinders the flow of traffic, driving a vehicle without license plates, driving a vehicle without a front or rear license plate, driving an unregistered vehicle, using a vehicle for purposes other than the ones it serves, driving a vehicle that a person is not licensed to operate as indicated on their drivers license, performing dangerous driving maneuvers, renting or replacing tires or any other vehicle part for the purpose of deceiving mechanical inspectors, and driving a motorcycle that generates a loud noise.

The third phase of the implementation of the traffic law will be announced at a later time, added the ISF statement.

The first phase of the law included violations linked to speeding, driving under the influence, and reckless driving of motorcyclists.

It urged citizens to abide by the new law and implement it for their safety.

The controversial new traffic law took effect earlier this month despite concerns over the high and unprecedented fines against violations.

**The law is very good, but will it be properly addressed by the concerned authorities?..**

The law is very good, but will be properly addressed by the concerned authorities? Would it just be another futile attempt to impose a law only for a short time then forgotten with the wind? And the authorities supposed to implement the law, are they competent enough? Do they really serve as an example to follow? What is their level of discipline and training, would they not abuse of this new law as they usually do? Lebanon is indeed suffering from many ailments, no new president, ailing economy, bad road, bad driving education, personally I don't see this law doing enough, far from that, to solve our problems, we must go to grass roots and start from there, anything less will provide us with only half baked solutions.

I really hope this works out and I do not understand why they say it's "controversial"? In most civilized countries, most people have no problem obeying the driving laws. In order to have people change their driving habits (for the better) you have to get them where it hurts, which is their wallets.
I agree though, I really hope it doesn't get to the point where the officers abuse their power but things have to start at some point.
There is nothing worse than seeing how chaotic the driving is in Lebanon and it's an embarrassment when that's one of the first things that anyone who arrives to Lebanon gets to experience.

There is an effort in the country to replace the previous chaos by a state of law, where rules exist, where taxes are paid, and where everyone is under the law.