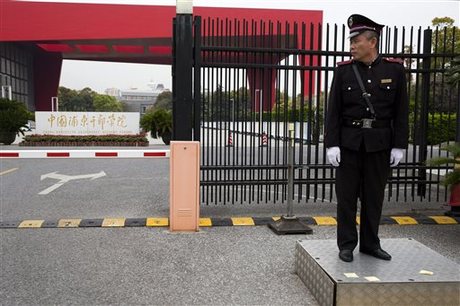 Chinese Communist Party chief Xi Jinping warned on Monday against Taiwan being seen as a country as he met the head of the island's ruling party, the first such encounter in seven years.

The two parties fought a civil war that ended in 1949 with Taiwan splitting from the mainland.

But both sides stress there is a single China, a key concept for Beijing, which is constantly wary of the potential for Taiwan  eventually to go its own way and declare independence.

Xi urged against any semantic erosions such as "one country on each side" and "one China, one Taiwan", Xinhua said.

Beijing still regards the island as a province awaiting reunification, and has never ruled out the use of force to achieve it.

But relations have been improving since Chu's party -- which has a non-confrontational stance towards the mainland -- returned to power in Taipei in 2008.

Xi said Taiwan would receive "priority" on the mainland but did not provide details.

"Our efforts to open up to Taiwan compatriots will be bigger," he said.

"The two sides can consult with each other on (an) equal basis under the principle of One China, and reach a reasonable arrangement," Xi added.

Xinhua quoted Chu as affirming that both Taiwan and the mainland were Chinese, and said he hopes that cooperation between the two sides would help ordinary people such as the young and small businessmen.

During that period Lien Chan in 2005 made the first trip to the mainland by a KMT head since 1949.

The landmark visit helped pave the way for relations to warm after the KMT's Ma Ying-jeou was elected in 2008. The same year KMT chairman Wu Po-hsiung visited the mainland, the last holder of the post to do so.

In June 2010 the two sides signed a trade pact known as the Economic Cooperation Framework Agreement, widely seen as the boldest step yet towards reconciliation.

Ma was re-elected in 2012 but public sentiment in Taiwan has since turned against cosying up too snugly with Beijing, with voters saying trade deals have been agreed in secret and not benefited ordinary citizens.

In March last year around 200 students occupied Taiwan's parliament for more than three weeks to demonstrate against a controversial services trade pact, while thousands rallied in support of what became known as the "Sunflower Movement".

The KMT suffered its worst-ever showing in local polls in November -- seen as a barometer for presidential elections in 2016 -- and Ma eventually stepped down as party chief to be replaced by Chu.

In Taiwan a group of about 30 members of the radical anti-China opposition Taiwan Solidarity Union (TSU) rallied outside KMT headquarters in central Taipei to criticize Chu's visit.

TSU official Chang Chao-lin said the meeting with Xi was part of Beijing's strategy to bring the island into China's fold.

The meeting comes in the wake of Taipei's application to join the China-led Asian Infrastructure Investment Bank being rejected, with Beijing saying the island could join later under an "appropriate name".

Taiwan's official name is the Republic of China, but the International Olympic Committee refers to it as "Chinese Taipei", and at the Asian Development Bank it is known as "Taipei, China".

Xi was upbeat on Taiwan's desire to participate.

"We welcome Taiwan's willingness to join the Asian Infrastructure Investment Bank," he said.