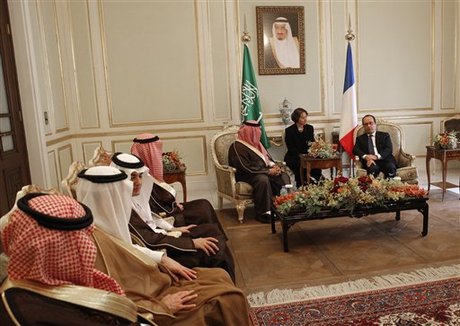 Salman's call came at a meeting of Gulf monarchs in Riyadh that was also attended by French President Francois Hollande, who said his country was "by the side" of Gulf nations.

In a clear reference to Iran, Salman spoke of the need to confront an external threat that "aims to expand control and impose its hegemony", threatening regional stability and creating "sectarian sedition."

Soon afterwards, the Saudi-led coalition carrying out air raids in Yemen said mortar shells fired by Iran-backed Huthi Shiite rebels from across the border had struck the Saudi town of Najran.

"Air and ground forces will respond in the right way to these hazardous acts and will not allow them to be repeated," Assiri said.

The Saudi military had already deployed Apache combat helicopters to target the rebels in the border area, he added.

Hollande, the first Western leader to attend a GCC summit, said France shared the dangers facing the region and he had come "to affirm the commitment of France to be by your side."

All but Oman are in the Saudi-led Sunni coalition that on March 26 launched air strikes in Yemen against the Huthi rebels and their allies who have seized large parts of the country including Sanaa.

Concern has mounted over the air campaign, which has continued despite the coalition announcing late last month it was moving on to a new phase.

The United Nations says at least 1,200 people have been killed in Yemen since March 19, and has repeatedly warned that the already impoverished Arabian Peninsula state faces a major humanitarian crisis.

Saudi Arabia has said it is considering temporary halts in air strikes to allow aid deliveries.

His visit comes as Paris strengthens its political and economic relations with the oil- and gas-rich Gulf monarchies.

He arrived in Riyadh from GCC member Qatar after attending the signing of a 6.3-billion-euro ($7-billion) deal between French aerospace firm Dassault and Qatari defense officials.

The agreement includes an order for 24 Rafale fighter jets, with an option on a further 12.

Most GCC countries are also part of a U.S.-led air coalition targeting the Islamic State jihadist group in Iraq and Syria.

Security was high in Riyadh Tuesday after IS threats to attack the kingdom, with green-bereted Royal Guards manning checkpoints and a sniffer dog checking vehicles.

Both Paris and Washington have sought to reassure the Gulf states about an international accord being finalized over Iran's nuclear program.

The Gulf fears Iran could still develop an atomic bomb under the deal that would limit its nuclear capabilities in return for lifting crippling international sanctions.

"I know that Iran is at the heart of your preoccupations," Hollande said.

The only other foreign leader invited to a GCC summit was Iran's then-president Mahmoud Ahmadinejad, in 2007.

On Monday after Hollande met Salman, a joint French-Saudi declaration "stressed the need to achieve by June 30, a robust (nuclear) agreement that is lasting, verifiable, indisputable and binding for Iran" which must "ensure" it would not develop an atomic bomb.

On Yemen, they stressed the importance of implementing a U.N. Security Council resolution calling on the rebels to withdraw from all areas they have seized since July 2014.

A source familiar with the situation said France has provided the Saudi-led coalition with satellite imagery of Yemen.

GCC deserve the best and the best is democracy

Growing concern, the Wahabis are about to realize that their operations in Yemen, didn't bear fruit. They are failing bad.

Hahahahhahaha thanks for cheering me up... "Ggrowing concerns" hahahahaha hahahahahahahah so you do have a sense of humor! :D

Tric
I really pitty your brain ...thin as air.