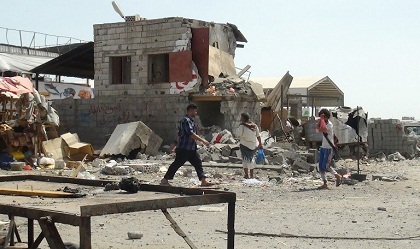 General Ali Nasser Hadi was killed as he led forces fighting Huthi Shiite rebels in the Tawahi district of the port city of Aden, the official told Agence France Presse.

General Hadi, who is not related to the exiled president, was appointed in March to lead loyalist forces in a southern area including the provinces of Aden, Abyan and Lahj.

Pro-Hadi forces, including military units and militia fighters, have been battling the Iran-backed rebels for weeks in Aden, the president's former stronghold.

Hadi fled Aden in late March as the Huthis advanced on the city after seizing control of large parts of the country, including the capital Sanaa.

A Saudi-led coalition launched air strikes against the rebels including in Aden, where fighting has continued to rage.

The city's health chief Al-Khader Laswar said early Thursday that the previous 24 hours of fighting in Aden had left seven people dead and 95 others wounded -- including pro-Hadi fighters and civilians.