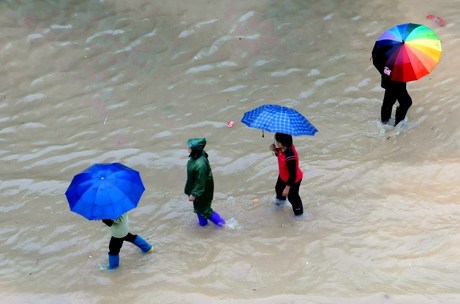 Typhoon Noul crashed into the southern Japanese island chain of Okinawa Tuesday, after killing two people in the Philippines, bringing surging waves and howling winds as it headed towards the mainland.

Heavy rain and gale-force gusts were lashing a wide swathe of the archipelago, television footage showed, as pedestrians struggled with their umbrellas and scurried for shelter.

The storm, which was later downgraded to a depression, left at least six people injured and 13 houses damaged in Tokunoshima island, northeast of Okinawa, a local official said.

Some crops were damaged and a number of buildings affected by the wind.

The Japan Meteorological Agency said Noul, the first typhoon of the season to hit Japan, was working its way northeast towards the main island of Honshu.

Forecasters warned of gusts up to 180 kilometers (110 miles) per hour and said there was a danger of high waves, thunderstorms, flood and gales in much of the country.

Later in the day, the typhoon was downgraded to an "extra-tropical cyclone", but the agency warned it was expected to be near Tokyo overnight with strong winds and heavy rain.

The storm killed two people as it scraped over the Philippines' northeastern tip, according to authorities, who said Monday that the evacuation of coastal villages and volcanic slopes averted a higher toll.

It later skirted the coast of Taiwan, after 1,000 tourists were evacuated from the scenic Green island in the southeast in anticipation of the storm.