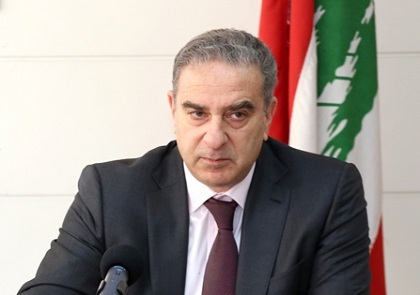 Tourism Minister Michel Pharaon stressed on Sunday that the cabinet of Prime Minister Tammam Salam was able to compensate for the nearly one year presidential vacuum, expressing concern that paralysis would affect state institutions.

“Those who are boycotting (presidential) election sessions are responsible” for the lingering crisis, Pharaon said in a lengthy interview with the Kuwaiti al-Rai newspaper.

He pointed out that the Lebanese Constitution compels lawmakers to attend the session, considering it a “national and constitutional responsibility.”

“It's an attempt to hit the (Lebanese democratic) system and the regularity of state institutions,” Pharaon warned.

Pharaon described the boycott of the parliament as a “new phenomena,” calling for open presidential election sessions.

Lebanon has been without a president since May last year when the term of Michel Suleiman ended without the election of a successor.

Ongoing disputes between the rival March 8 and 14 camps over a compromise candidate have thwarted the election.

Hizbullah's Loyalty to the Resistance and MP Michel Aoun's Change and Reform blocs have been boycotting the polls over the dispute.

Asked about the rift over the extension of high-ranking security officials' tenure, the Mustaqbal Movement minister said that the matter “requires broad discussions.”

“The extension of security officials' terms could wait a little, or we can resolve all crises as part of one package.”

Pharaon soothed fears over the cabinet’s situation, saying: “It is compensating for the vacuum... it's the responsibility of everyone” to maintain its stability.

Concerning Free Patriotic Movement chief Aoun's threats to boycott the cabinet or withdraw his ministers, the minister considered such a decision to have repercussions on the “interests of the people and ignite political tension.”

Aoun questioned on Friday the need for what he described as an ineffective government. He continuously rejected the extension of the terms of high-ranking security officials, threatening to press the resignation of the ministers representing him in the cabinet.

The military posts in Lebanon are suffering as the result of the prolonged presidential vacuum.

Media reports had said that Aoun's main objective is to receive political consensus on the appointment of Commando Regiment chief Brig. Gen. Chamel Roukoz, who is Aoun's son-in-law, as army chief as part of a package for the appointment of other top security officers.

Roukoz's tenure ends in October while the term of Army Commander General Jean Qahwaji expires at the end of September.

On the sentence against former Minister Michel Samaha by the Military tribunal, Pharaon said that the verdict is “unjust.”

“Certainly Samaha's acts could be considered a terror felony one way or another.”

The tribunal sentenced on Wednesday Samaha to four-and-a-half years in jail over terrorism charges.

The verdict created uproar among politicians and civil society, who slammed the Military Tribunal for its light verdict.