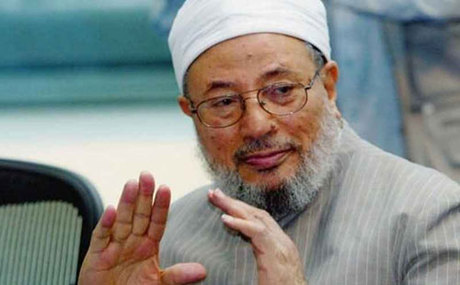 A prominent Qatar-based Muslim cleric said Sunday that death sentences handed down by an Egyptian court against himself and deposed Islamist president Mohamed Morsi violated Islam.

"I distance myself from these rulings," he said in a statement relayed by Doha-based broadcaster Al-Jazeera.

"They have no value and cannot be implemented because they are against the rule of God and people's laws and customs."

Qaradawi and his fellow defendants were convicted on charges relating to a mass jailbreak during the 2011 Arab Spring uprising that toppled longtime strongman Hosni Mubarak.

He is specifically charged with incitement, assistance to commit intentional murder and helping prisoners to escape, and an Egyptian warrant for his arrest was circulated by Interpol in December.

Qaradawi denies the charges, saying he was in Qatar, his longtime home in exile, at the time of the alleged offenses.

He was convicted in absentia on Saturday but can appeal the death sentence, which remains subject to the advice of Egypt's top Muslim cleric, the mufti.

Ties between Doha and Cairo have been strained over Qatar's backing for Morsi, who was ousted from power by then army chief and now President Abdel Fattah al-Sisi in 2013.

Although there was an apparent thaw at the end of last year when Qatar gave its full support to Sisi, relations between the two countries have again come under pressure in recent months.

In February, Cairo accused Doha of supporting terrorism in a row over Egyptian air strikes in Libya following the videotaped beheadings by jihadists of Egyptian Christians.

Qatar is regarded as the main supporter of the rival Islamist-backed administration that controls the capital Tripoli.

You are full of nonsense - except of course if ISIL is true Islam in your mind. In that case the problem and the sickness is yours. I may not agree with the man on many issues, but honest people avoid lies in their discourse - something that you are unable to do.

Is it ISIS or the holy book. You decide.

I totally agree with you qatari.