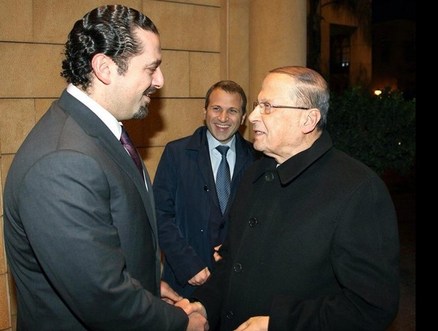 AL-Mustaqbal Movement leader Saad Hariri reportedly informed Free Patriotic Movement chief Michel Aoun that he rejects the appointment of a new army commander ahead of the election of a new head of state.

Sources revealed in comments published in An Nahar newspaper Friday that Hariri's envoy told Aoun that he doesn't object to the appointment of Commando Regiment chief Brig. Gen. Chamel Roukoz as army chief.

However, Hariri stressed that ending the presidential vacuum is a must to appoint a new army commander as “the new head of state, whoever he was, has to have an opinion on the matter.”

It is not relevant to accuse Ebola of manipulating the Caporal for destroying the institutions and pushing for the Mutelateh. It is the 100% responsibility of the Caporal to obey like a dog.

The mareedman said :"They will elect me, if not I will destroy everything and they will be forced to elect me."

He is doing it.

oh! look at this hypocrit who shut down the parliament for 2 years and now cries like a baby....

Hariri to Aoun: New President Essential to Appoint Army Chief the title says. Isn't it the same thing we're telling Aoun? isn't it that same logic we've been trying to drill through his ears? Has he listened, or will he listen? No, he will never listen, because if this new president is not to be him, then there will be NO new president, no new army generals, no hope for all decent and patriotic citizens, nothing. Aoun is not here for the good of folk and nation, he is here for the take, personal take, he will use any grammar and vocab to get there, but he must achieve his holiest of grails, Baabda, Baabda, Baabda. Hezbollah knowing Aoun's legendary greed and his preponderance to accept anything to get there will keep propping him up if need be, chaos settles in. But that won't be, there are still decent folks in Lebanon, and they form the majority, thanks goodness.

Ya FT, honestly I cannot thank divinity for having you answer in these ways all the time. So much for a meaningful debate with you.

Don't worry for Aoun... one way or another, he is doomed, he's destroying himself as he destroys Lebanon, the Christians won't forget... he is committing political suicide..

weel gayboy FT: you identify yourself so much with FPM that you are part of the shut down on which you agreed! LOLLLLLLL