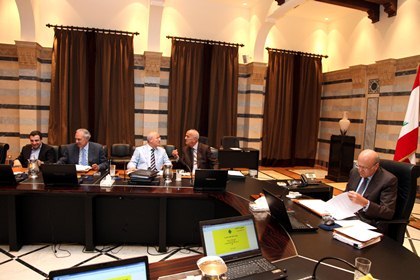 Ministers loyal to Free Patriotic Movement chief Michel Aoun and Progressive Socialist Party leader Walid Jumblat clashed during a cabinet session on Wednesday in what was seen as an attempt by the representatives of the FPM to exact revenge on the PSP ministers for scrutinizing Energy Minister Jebran Bassil’s electricity project.

During a lengthy session held at the Grand Serail, Bassil asked Public Works Minister Ghazi Aridi, who is loyal to Jumblat, to unveil all projects carried out by his ministry, ministerial sources told An Nahar daily on Thursday.

Bassil’s request angered Aridi and both ministers began shouting at each other. The energy minister also accused Aridi of spending funds on infrastructure works without the prior approval of the government.

Nahhas requested the cabinet to be informed about the deals made within the program, drawing a harsh retort from the PSP minister.

Last month, the cabinet approved an electricity project proposed by Bassil. But the endorsement came following months of wrangling between FPM ministers and mainly government members loyal to Jumblat who had asked for transparency and a clear mechanism to control the $1.2 billion funds to generate 700 Megawatts of electricity.

Wednesday’s arguments between the two sides were the ramifications of the debate that had raged over the electricity plan.

The ministerial sources said that the heated debate went out of hand when Premier Najib Miqati approved a proposal made by Ministers Mohammed Fneish and Ali Hassan Khalil to form a ministerial committee headed by Deputy PM Samir Moqbel on the implementation of the oil exploration law.

Bassil, who is vying for the post, rejected the proposal, drawing a condemnation by Miqati who expressed regret at the differences inside the cabinet and told the energy minister to either accept the suggestion or he would withdraw from discussion his proposal on oil exploration.

The cabinet later approved for Miqati to head the committee and for Moqbel to become a member. But the deputy PM refused.

Despite the verbal clashes, the government approved among other things, plans to start drilling for oil and gas on Lebanese soil after mapping the territories.

Is this a news article, or an editorial opinion piece? If it's the former, then why are there unsourced "facts"? If the latter, what is it doing on a news website (as a headlining story, no less)?

@ZD
Wake up dude! It is all over all tvs and newspapers chou beik??

I was referring to the following statement:

"Wednesday’s arguments between the two sides were the ramifications of the debate that had raged over the electricity plan."

That is not a sourced fact. It is the opinion of the writer, and should not be included in a news story if the editors have any journalistic professionalism.

But then, this IS Lebanon, so what am I complaining about?

Guys, hold on!
this is a game being played now.
they realize Miqati cannot but resign over the STL funding, thus they need to form a new government =, but they need to threaten Jumblat to make sure he will do exactly what hizbushaitan wants.
to be continued....

I dont like neither Aoun or Jumblat but honestly Bassil was asked to be monitored for his project, which i think is totally right, so as jumblat ministers should be monitored as well , lets forget vengeance between the FPM or PSP, the important thing is a transparent way to hold accountable everyone in high positions that are manipulating public funds right and left without even detailing specifics to the lebanese people.

Its is not normal to live like this anymore, the politicians do not care about the people , and they are not really in conflict over politics, its just a question of money, some think Iran and Syria pays more, some think Israel and the US do, but neither of them have convictions in the state of Lebanon or its independance, And now what is happening for every project is not differences in politics, but rather in business deals, everyone wants a cut, when they dont, they argue and fight, thats all,

I agree with pacifier, but from a wider perspective, Taef took powers away from the President and put them with the Government. Fine. Unfortunately, the Government has often been confused with the Prime Minister. If Christians want to play a major role in the country, ministers have to have a real authority, and in this government they are trying to.
Having said this controls, audits, parliamentary oversight, etc ... remain necessary and anything helping transparency has to be welcome.

the "geha" zionist is trying to make everything political, just check how he links little bickering to STL, Miqati falling, hezb'allah...complete package of insanity