IS and Nusra Clash in Arsal Outskirts after Militant Abducted 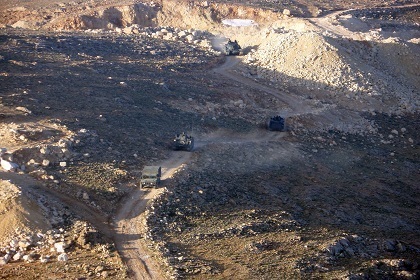 Clashes erupted on Monday in the outskirts of the northeastern border town of Arsal between the extremist Islamic State and al-Nusra Front groups, state-run National News Agency reported.

The agency said the fighting broke out after the IS shot a man identified as Ahmed Seifeddine in the town before abducting him to its mountainous outskirts.

The abductee goes by the nickname Al-Silis and is a member of al-Nusra Front, NNA added.

The two groups have been clashing in the town's outskirts for months now.

Despite ideological similarities, al-Nusra and the IS are opposed and in conflict with each other in parts of Syria, particularly in the north.

In August 2014, the two groups however joined forces and engaged in a deadly battle with the Lebanese army in and around Arsal. They were eventually ousted from the town but they abducted dozens of troops and policemen during their retreat.

Four hostages have been executed until the moment and the two groups have threatened further killings if Lebanese authorities do not fulfill their demands.

All killers and warmongers will end up in Hell.

ISIS is ultra-extremist while Nusra and HA are only extremist.

Enjoy your popcorn. Now there's a good cinema for us all, it's free too.