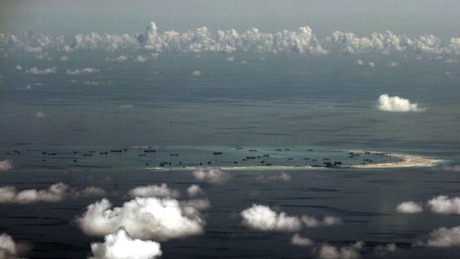 Taiwan launched a peace plan Tuesday in what it said was a bid to ease growing tensions in the South China Sea, as Beijing steps up development of a disputed island chain.

But China responded by reiterating the importance of "national territorial sovereignty" and was unlikely to come to the negotiating table, analysts said.

China and Taiwan are among several claimants of parts of the South China Sea including the Spratly archipelago, where China is building artificial islands and facilities including an airstrip.

That has fueled tension with Washington as well as regional neighbors.

"As this year marks the 70th anniversary of the end of the Second World War, the countries surrounding the South China Sea should heed the lessons of history and commit themselves to advancing regional peace and prosperity," Taiwan's President Ma Ying-jeou said at the opening of an international law conference in Taipei.

He called for regional cooperation to enable claimants to share natural resources, but gave no further detail on how the "South China Sea Peace Initiative" would be implemented.

China claims nearly all of the South China Sea, even waters approaching the coasts of the Philippines and other Asian neighbors.

The Spratlys -- which lie between Vietnam and the Philippines -- are claimed entirely or in part by Taiwan, China, Vietnam, Malaysia, the Philippines and Brunei and the archipelago has been at the centre of escalating rows.

When asked about Taiwan's peace plan, China's foreign ministry spokeswoman Hua Chunying said Tuesday: "We believe that Chinese people from across the straits have the obligation to safeguard national territorial sovereignty and maritime rights and interests, as well as peace and stability of the South China Sea."

Beijing last week warned the U.S. against "highly irresponsible and dangerous" actions after it ordered a U.S. Navy surveillance plane out of airspace near the Spratlys.

Analysts said Ma's announcement could also be a bid to reiterate Taiwan's own claims.

"Few countries may take the initiative seriously, but Ma has to make it clear that Taiwan will by no means back down on territorial issues, while calling for no use of force," said George Tsai, political science professor at Taipei's Chinese Culture University.

"Saying it at a time when tensions are growing may capture more international exposure."

Taiwan administers Taiping, the largest island in the Spratlys, but has been left out of regional talks over the archipelago due to pressure from Beijing.

China still regards Taiwan as part of its territory awaiting reunification, by force if necessary, even though Taiwan has governed itself since 1949 when it split from the mainland after a civil war.