More than 700 Migrants Rescued in Mediterranean 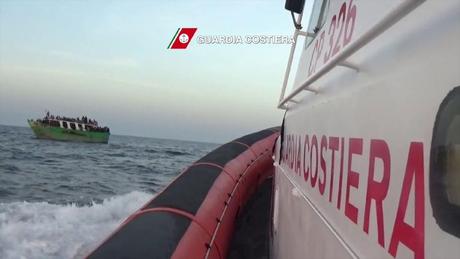 A total of 741 migrants who set sail from Libya in the hopes of reaching Europe were rescued in the Mediterranean on Thursday, the Italian coastguard said.

The rescue operation was coordinated by the coastguard, a spokesman told Agence France Presse, and carried out with the help of German, Irish and British naval vessels under the auspices of the EU's Frontex border control agency.

The migrants were trying to cross the Mediterranean Sea on six boats -- five of them inflatable vessels -- before they were helped to safety in the Strait of Sicily, the coastguard said.

So far this year, some 1,770 migrants have perished on the hazardous journey to Europe, according to the International Organisation for Migration, a 30-fold increase on the same period in 2014.

The huge spike in the number of people seeking to reach European shores has been attributed to the worsening security situation in Libya -- the staging post for most of the crossings -- as well as milder weather.

After a string of deadly shipwrecks that sparked global alarm, EU ministers this month approved plans for a military operation to fight people smugglers in the Mediterranean, although proposals to destroy traffickers' boats in Libyan waters still need U.N. approval.

The European Commission has also unveiled plans to make the rest of the 28-nation EU share the burden of frontline states such as Italy, Greece and Malta, although some countries like Britain are opposed.