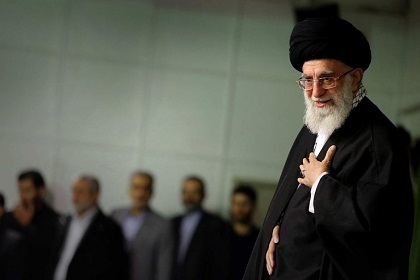 Iran's supreme leader Ayatollah Ali Khamenei called Thursday for unity in the Muslim world in order to counter "oppression" from the West, on the anniversary of his predecessor's death.

In a speech marking 26 years since the death of Ayatollah Ruhollah Khomeini, the founder of the Islamic republic, Khamenei also ruled out any warming of ties with the United States, one of several world powers negotiating a nuclear deal with Tehran.

"We must pay attention to conspiracies seeking to divide on the basis of religion, between Shiites and Sunnis, or on an ethnic basis," he said.

Khamenei praised Khomeini for having coined the term "the Great Satan" to refer to the United States, with which diplomatic ties have been severed since 1980.

Khamenei, who has the final say on all state matters in Iran, expressed doubt over the sincerity of the world powers to strike a nuclear deal with Tehran.

"In recent events, we have seen that we cannot have confidence in the promises of the oppressors and their declarations during private meetings," he said.

Khamenei, while supporting the Iranian negotiators, has often expressed his doubts about the possible outcome of the negotiations.

A senior Iranian negotiator said Thursday that "important progress" had been made on the nuclear issue, but added that it would be a "complicated and difficult" task to get a lasting accord struck by a June 30 deadline.