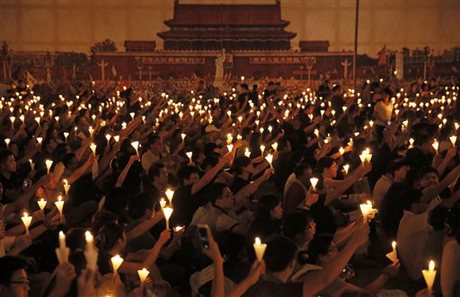 A park in central Hong Kong turned into a sea of candles Thursday as tens of thousands gathered to mark the 26th anniversary of China's Tiananmen Square crackdown, with the city deeply divided ahead of a vote on how to choose its next leader.

Six football pitches in Victoria Park were filled with sombre crowds who held candles aloft as they paid silent tribute to the dead.

Students later took to the stage and burned a copy of Hong Kong's mini-constitution, or Basic Law, saying it "restricted democracy".

Hong Kong is the only location on Chinese soil to see a major commemoration of the military's brutal crushing of pro-democracy protests in central Beijing in 1989.

Hundreds -- by some estimates more than a thousand -- died after the Communist Party sent tanks to crush demonstrations at the square in the heart of Beijing, where student-led protesters had staged a peaceful seven-week sit-in to demand democratic reforms.

"Tens of thousands have gathered every year to mourn your sacrifice... hoping your day of justice will come," said Mak Hoi-wah of the Alliance in Support of Patriotic Democratic Movements of China, which organizes the vigil.

"We will continue to demand an independent investigation into the truth."

The wife of one student who died during the Tiananmen crackdown wept as she thanked Hong Kongers for coming to the park every year.

The U.S. called for "an official accounting of the victims" of the 1989 crackdown Thursday, as well as the release from prison of those serving Tiananmen-related sentences.

The State Department also urged a halt to the harassment and detention of those who want to commemorate the anniversary.

U.S.-based group Chinese Human Rights Defenders said state security had detained dozens of activists in the Chinese provinces of Shaanxi and Hunan ahead of this year's anniversary.

Zhang Xianling, 77, whose then 19-year-old son was killed during the crackdown, said she visited his grave site in Beijing Thursday, where dozens of plainclothes security staff stood watching.

More than seven security officers remain near her apartment, with two guarding her door, she told AFP.

"Their main purpose is to stop me receiving interviews... and visiting areas deemed sensitive, such as Tiananmen Square," she said.

In Taiwan, prominent former student leaders who were at Tiananmen -- Wu'er Kaixi and Wang Dan -- spoke to a crowd of hundreds in the capital Taipei, some of whom carried yellow umbrellas, the symbol of Hong Kong's pro-democracy movement.

The Hong Kong vigil comes as tensions are high just two weeks ahead of a vote on the government's controversial election roadmap.

It also follows huge pro-democracy protests that paralyzed parts of the city for months last year.

The election proposal goes before the legislature on June 17 and lays out a plan for the first ever public vote for Hong Kong's chief executive.

It sticks to a stipulation from Beijing that candidates must be screened, a ruling that triggered last year's street rallies.

Campaigners call the proposal "fake democracy", and opposition lawmakers have pledged to vote it down.

There were some verbal clashes near the park between pro-democracy and pro-Beijing groups -- who support the government's reform package.

But there is also a split in the city's pro-democracy camp, reflected in an alternative gathering held by Hong Kong University's student union, which has taken part in all previous June 4 vigils and took a leading role in last year's demonstrations.

Organisers said they did not agree with the Alliance's premise that democratization of China should be the prerequisite for democracy in Hong Kong.

"As we are Hongkongers we should focus on our local democratic development, rather than focusing on China," said Ben Tsang, a 22-year-old hospitality student at the HKU event.

But those at Victoria Park urged unity.

"This year I feel it's especially important to come out because people are saying the movement is marginalized or shrinking. We need to show that people's support is strong, regardless (of) who is leading," Walter Wong, 53, told AFP.

Hong Kong is largely self-governed and has far greater civil liberties than on the mainland, where public discussion of Tiananmen is forbidden.