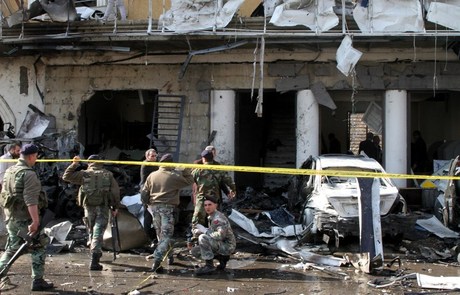 A member of the al-Qaida-affiliated al-Nusra Front group was arrested in the northeastern border town of Arsal for having links to various bombings that have taken place in Lebanon in recent months, reported the National News Agency on Friday.

Ahmed al-Atrash, also known as Nisr Arsal, was arrested by the army intelligence.

He is accused of transporting explosives-rigged cars that were used in bombings in Beirut's southern suburbs of Dahieh and the Bekaa area of al-Hermel, both Hizbullah targets.

He is also accused of being involved in fighting against the army.

Hizbullah strongholds had been the target of bombings by extremist groups linked to the fighting in Syria.

The attacks stem from the party's fighting alongside Syrian regime forces against the rebel uprising in the neighboring country.

but but but M8ers keep saying that arsal is under the control of M14 and the army cannot enter! LOL
another big blow to their idiotic propaganda as they keep whining... poor idiots they are...