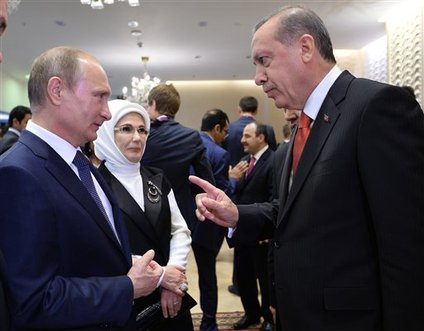 The two leaders met a day after attending the opening ceremony of the inaugural European Games, hosted by Azerbaijan and tainted by controversy over the ex-Soviet country's rights record.

Speaking ahead of their closed-door talks, Erdogan, a close ally of Azerbaijani President Ilham Aliyev, remarked to Putin on the absence of EU leaders from the Games in Baku.

"It's called the European Games but there aren't actually any leaders of EU member states here," Erdogan was quoted as saying by Turkish news agencies.

"Turkey, a candidate for EU entry, represented the whole European Union," a smiling Putin said in televised comments before the pair held what Turkish media said was an hour and a half meeting.

Ahead of what he said would be "very substantive talks," Putin's spokesman said that the leaders could discuss the TurkStream pipeline to supply Russian gas to Turkey, whose construction is set to begin at the end of this month.

The leaders were also set to discuss the situation in Syria, Dmitry Peskov said.

"They will need to compare notes and exchange opinions on the complex situation in regional affairs -- that's the situation in Syria, for sure."

On the Turkish side, the delegation included Foreign Minister Mevlut Cavusoglu and Energy Minister Taner Yildiz.

The two leaders last met in December, when Putin made a one-day state visit to Turkey.

This was their first face-to-face meeting since Putin hugely disappointed Ankara by attending the 100th anniversary of the Armenian genocide in Yerevan in April a rare blow to the flourishing bilateral relationship.

Erdogan at the time accused Putin of "supporting claims based on Armenian lies" after he, along with French and German leaders, described the slaughter of an estimated 1.5 million Armenians by Ottoman forces as genocide -- which Turkey strongly objects to.

Following the Erdogan talks, Putin then met with Azerbaijan's Aliyev at his residence, congratulating him on the "impressive spectacle" of the games' opening, TASS reported.

The Kremlin said the leaders were set to discuss Azerbaijan's disputed region of Nagorny Karabakh, controlled by ethnic Armenians since the early 1990s.