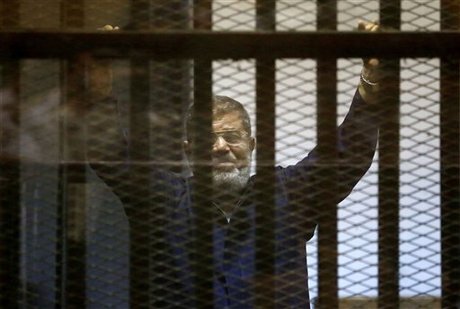 Qatar expressed "deep concern" on Wednesday over a death sentence handed down by an Egyptian court against ousted Islamist president Mohamed Morsi and called for his release.

The United States has branded the sentencing of Egypt's first democratically elected president as politically motivated.

"Doha adds its voice to the countries calling for the verdict to be quashed and Morsi released," said the statement on the official Qatar News Agency.

An Egyptian court on Tuesday upheld a death sentence handed down against Morsi on charges of plotting jailbreaks and attacks on police during the country's 2011 uprising.

It also sentenced him to life in prison on charges of spying for Iran and militant groups including the Palestinian Islamist movement Hamas, several of whose leaders are based in Qatar.

The Egyptian court also upheld death sentences against around 100 other defendants, including the Qatar-based cleric Yusuf Qaradawi, who was tried in absentia.

"The death sentences against political dissidents in Egypt harm security and stability, and close the door to reconciliation and harmony," the Qatari statement said.

Ties between Doha and Cairo had been strained over Qatar's backing for Morsi, ousted by then army chief and now President Abdel Fattah al-Sisi in 2013.

The dispute triggered a crisis last year pitting Qatar against its Gulf neighbors Bahrain, Saudi Arabia and the United Arab Emirates -- all backers of Sisi.

It ended in a compromise in December, when Qatar pledged its support to Sisi, even though it still shelters many leaders of Morsi's Muslim Brotherhood which is now blacklisted as a terrorist group in Egypt.