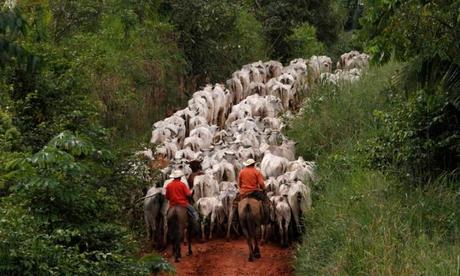 Food retailers such as McDonald’s, Krispy Kreme, Dunkin Donuts, as well as agribusinesses like Cargill, are among the big companies to recently make zero-deforestation pledges. But do these commitments achieve anything other than PR for food companies? New research indicates they might.

A study published Tuesday in the journal Conservation Letters says that public agreements made by beef suppliers in Brazil have had a real impact on rancher and slaughterhouse behavior in the Amazon. A team led by Holly Gibbs of the University of Wisconsin-Madison observed data on land use in the state of Pará before and after a 2009 agreement by major meatpacking companies to remove deforestation from their supply chain. The researchers found that the deforestation rate among ranch owners they studied has since been cut in half.

The agreement, signed by meatpacking companies JBS-Friboi, Minerva, Marfrig and Bertin, imposed a moratorium on buying cattle linked to deforestation in Brazil, where nearly two-thirds of deforested land is used as cattle pasture. The meatpacking companies also agreed to monitor their supply chain and only purchase cattle from farms in Brazil’s environmental registry, Cadastro Ambiental Rural (CAR). They also refused to buy from cattle farms that had recently cleared forest land or in any way employed slave labor.

Gibbs and her team of researchers tracked the land use of farms working with JBS-Friboi – the world’s largest meat packing company - between 2008 and 2013. They used satellite data to monitor deforestation, gathere public data on land registration and survey cattle ranchers on their behavior.

Before the agreement, 40% of JBS-Friboi’s direct suppliers were linked to recent deforestation. By 2013, the number had fallen to less than 4%.

Cattle rearing in Brazil is a complex process in which cattle are calved, reared and fattened in different locations before arriving at slaughterhouses. Meatpacking companies that supply beef to food giants such as McDonald’s are only one stop in a supply-chain that relies on an assortment of cattle suppliers.

This makes tracing cattle and ensuring that it is entirely deforestation-free nearly impossible. However, the agreement quickly changed the behavior of all major suppliers to JBS-Friboi, the researchers found.

“We see that the ranchers that continue to sell to JBS after the agreement reduced their deforestation rates dramatically and had much lower deforestation rates than properties that sold before the agreement,” Gibbs says. Most importantly, these changes happened in a matter of months. “This is in sharp contrast to things like the Brazilian forest code,” says Gibbs, referring to a controversial piece of legislation that regulates forest reserves, “which takes years to effectively implement”.

The beef agreement was not the first major anti-deforestation pledge by corporations. A similar agreement, the Amazon Soy Moratorium, signed by major food corporations in 2006, has also had success in fighting deforestation. The voluntary pledge to stop buying soy linked to deforestation was extended a third time, to mid-2016, late last year.

Researcher Holly Gibbs says these sorts of agreements are growing in popularity. Large businesses concerned about international market access have incentive to avoid the increasingly bad publicity tied to habitat destruction. In response to public pressure, Gibbs says, “We see that the agribusiness powerhouses like ADM (Archer Daniels Midland) and McDonald’s are promising to delink agricultural production from tropical deforestation.”

The limitations of public agreements and monitoring systems

“There are about 95 slaughterhouses in the legal Amazon,” Gibbs says, “and about 65 of them have signed some type of zero-deforestation commitment, but many of them still don’t have monitoring systems.”

However, there are limitations to what these agreements can achieve. The voluntary system is easy to get around, the researchers found. Some of the ranchers Gibbs’ team spoke to explained that they could go “right past JBS slaughterhouse and sell to their neighboring slaughterhouse”. Monitoring only direct sales to meatpacking companies leaves the supply chain open to cattle laundering, where cattle may be reared in deforested land but sold to other compliant farms before they arrive at slaughterhouses.

But Gibbs is optimistic. The pledge has not seemed to hurt the beef market or negatively affect the meatpacking business. JBS-Friboi, which operated nine slaughterhouses in 2009, has ramped up operations to 32 in 2013, four years after the agreement. The company did not pay higher prices to compliant ranch owners.

While Gibbs says there has been a great deal of momentum towards putting monitoring systems in place, agribusinesses, consumers and activists should continue to demand zero deforestation in the supply chain. “There are a lot of positive signs that with continued investment in these systems, it could really pay dividends for forest conservation,” Gibbs says. “But we certainly need more work.”