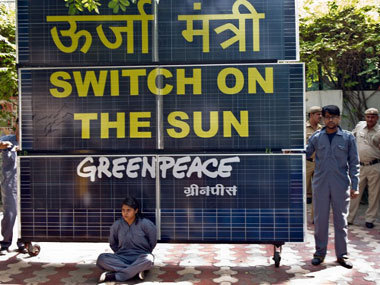 India has recently ramped up attacks on environmental and development organizations that work on climate, clean energy and sustainability issues. The world’s largest democracy has frozen bank accounts, restricted international donations, and in some cases prevented the organizations’ staffers from traveling abroad.

The actions come just seven months ahead of international climate treaty talks in Paris in December, and are inspired by fear that foreign interests are trying to curb the nation's economic growth. India is the world's third largest emitter of carbon dioxide, behind China and the United States, and home to millions of the world's people most vulnerable to global warming impacts such as flooding, extreme heat and sea level rise. As a result, India will play a crucial role in the negotiations. Prime Minister Narendra Modi has stressed in recent international speeches that his nation must take a leadership role in the "pressing global problem" of climate change.

Environmentalists said his administration's attacks on the very civil society groups that have been integral in pushing India and other nations to take action on climate change "could hamper the country’s global standing" at the talks, according to Divya Raghunandan, program director of Greenpeace India.

Greenpeace India has had its foreign donations repeatedly frozen—and later unfrozen by Indian courts—over the last year. In late April, the green group learned government officials had frozen seven of its bank accounts that are built largely on domestic donations, which make up approximately 70 percent of its $3.2 million annual budget. The maneuver put the organization in danger of having to shutter its operations in the country before the end of the month. No other country has restricted Greenpeace in this way.

Since opening in 2001, Greenpeace India has been one of the most vocal anti-coal groups in the country, bucking the Modi administration's all-of-the-above, pro-fossil fuel energy strategy. The group successfully blocked coal mining in the Mahan forest in central India after a four-year legal battle and civil disobedience campaign. The organization, which has a staff of 340, also persuaded tea companies to phase out pesticides after it conducted an investigation into their health impacts on workers and consumers.

Greenpeace is hardly the only such organization facing government strictures. The Ford Foundation, 350.org and the ClimateWorks Foundation have seen their donations into India restricted or questioned by federal agencies as well. Nearly 9,000 NGOs (non-government organizations) were notified last month that their licenses to receive funding from abroad had been revoked. So far, even basic details about these groups, such as the issues they work on, haven't been revealed.

The maneuvers haven't completely paralyzed the organizations. Several groups, however, have shifted their focus to less volatile issues or toned down their protests since the attacks began. 350.org, for example, has shifted its focus from stopping coal production to fighting air pollution, but even that work has come under fire recently.

The government's concerns about foreign funding stem from the economic slump that India experienced between 2010 and 2013: its growth rate dropped 5 percentage points in four years. According to an Indian intelligence report leaked last year, government officials believe foreign-based environment and development groups were being paid by foreign interests to purposefully curtail the country's economic growth by subverting projects like coal mines and timber harvesting.

William Antholis, an expert in climate change, international negotiations and development at the University of Virginia, said it is "hard to read what is happening" in India.

"The crackdown on foreign-funded NGOs may be an attempt for Modi to create space so he can act in a way [on climate change] that is not perceived as being influenced by foreign pressure," Antholis said. "But this could also simply be Indian nationalist xenophobia."

The idea that civil society organizations "reduced Indian GDP by a number of percentage points is simply absurd," said Raghunandan. "We are a tiny gnat compared to India’s giant corporations. The idea that a group of a few hundred people have such enormous influence over the Indian economy smacks of paranoia."

The real threat, Raghunandan warned, flows from the top, not the bottom.

"We are being muzzled," he said. "Unless this block on our domestic accounts is removed, our future is in real doubt."

Climate change and power in India are hugely complicated and challenging issues. Parts of the country still lack electricity while blackouts are near daily occurrences in others. In 2012, amidst extreme heat and a late monsoon season that meant hydroelectric plants were generating less than average energy, over 600 million people—half of the entire country and twice the population of the United States—lost power.

Modi served as leader of the western Indian state of Gujarat from 2001 to 2014. In that time, he transformed the area's power system into India's most expansive and reliable. He did it largely by restructuring the electrical grid, cracking down on electricity theft, and charging residents for their power usage—a novel practice in the country at the time. Modi also embraced an all-of-the-above energy strategy, expanding coal, hydroelectricity, and renewable power generation.

When he ran for prime minister of India in 2014, Modi campaigned on the promise of applying the power reforms in Gujarat to the rest of the country. He has spoken openly about the need for international climate action and expansion of renewable energy, calling the latter "a personal and national priority" during a visit with President Barack Obama earlier this year. But environmentalists disagree with Modi's strong support for a growing fossil fuel sector in India, said Hoda Baraka, a 350.org international spokeswoman who has been watching the situation in India closely. Already, Modi has fast-tracked coal mining projects in several parts of the country. The government plans to double India's domestic coal use by 2019. Political and environmental experts say India, not China, could be the biggest hurdle in reaching an international agreement on climate change in December.

When Modi talks about the growing need to tackle climate change, Baraka said, “It is a contradiction that cannot be overlooked.”

India's wind and solar electricity increased 13 percent in the last year, but the nation is still the world's third-largest coal consumer, after China and the United States. Federal officials argue an all-of-the-above energy strategy with expansion of both fossil fuels and renewables is the only way they will be able to grow their economy and provide reliable power to the 77 million people still living without electricity in the country today. The country's long-term plan is to expand, and increase the tax on, coal production to fund large-scale renewable energy projects. Modi said he hopes to spend $100 billion to reach 175 gigawatts of renewable power by 2022.

"There is no way India is going to grow its economy without growing coal," Antholis said. "The idea that Prime Minister Modi can't make positive pledges to climate without stopping coal is holding India to a higher standard than we're holding China or even ourselves."

'On the Chopping Block'

Environmentalists have long faced pushback from governments for their campaigns. Russia arrested 30 Greenpeace activists in 2013 for trying to board drilling rigs in the Arctic Ocean. The Canadian Security Intelligence Service labeled environmental activists in Canada "a threat to national security" because of their attempts to block the controversial Keystone XL pipeline project, which would carry carbon-intense tar sands crude from Alberta to refineries in Texas. In the U.S., the Federal Bureau of Investigation spied on anti-Keystone XL activists in Houston, labeling them "environmental extremists."

But environmental leaders said the recent crackdown in India is particularly worrisome because the nation's 68-year-old democratic system is chiefly considered stable. India, which is home to 1.25 billion people, has one of the highest voter turnouts in the world—66.4 percent in the 2014 election, compared to the United States' 57.5 percent.

Baraka said 350.org's funds sent to India have come "under scrutiny" by the federal government. The organization does not have headquarters in the country, but does have staffers based there. Hoda said the group is answering officials' questions regarding its financing in the country and trying to work out a solution.

Dozens of others, including the Ford Foundation, were put on a government watch list that requires approval from the Ministry of Home Affairs before they can send money to Indian organizations.

"Any sort of civil society group that has a different viewpoint than the government is starting to get caught up in this," said Nicole Ghio, who works on international climate issues for the Sierra Club.

In a letter to Prime Minister Modi on May 2, nearly 150 groups, including Greenpeace, condemned the attacks. "We write to you today...to express our deep concern at how civil society organizations in general and their support systems, including donors, are being labeled and targeted," they wrote.

"With so many voices engaged in the debate, there are sure to be some whose views others find objectionable," Verma said. "That is part of the beauty of the vibrant, thriving democracies we have chosen."

If Greenpeace does have to shutter its doors, it "would send a chilling signal to the otherwise robust civil society of this country," Raghunandan said. "By strangulating Greenpeace, the government has put every other NGO on the chopping block."