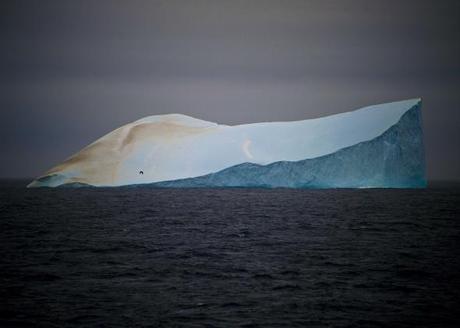 Earth’s polar regions are in the midst of a stunning transformation. As global warming accelerates, evidence of change is perhaps most obvious in our planet’s ice.

More than a decade ago, scientists watched in awe as Antarctica’s Larsen B Ice Shelf shattered almost completely in just six weeks. No one had ever seen such a large mass of ice vanish so quickly.

Now, a new study from NASA, released this week, predicts that what remains of Larsen B will be totally gone in less than five years. Since ice shelves are floating extensions of glaciers, the breakup won’t immediately raise sea levels. But ice shelves do act as a barrier for their parent glaciers—so once they’re gone, the door opens for those glaciers to accelerate.

Evidence from other recent ice shelf disintegrations, like the much smaller Larsen A in 1995 and the 2002 Larsen B collapse, point toward as much as an eight-fold increase in speed of the glaciers that created them—ushering in a potential spike in sea level rise across the globe once fresh ice reaches the ocean.

What’s left of the Larsen B is only half the size of Rhode Island—a relative pipsqueak when compared to other vulnerable ice shelves on the still-frozen-for-now continent. And that’s what really worries scientists.

“We have this rare opportunity of this ice shelf destabilizing and eventually collapsing in front of our eyes,” said Ala Khazendar, the study’s lead author in a video statement. “It is certainly a warning.” .

Khazendar’s co-author Eric Rignot agrees, emailing me that the ongoing breakup of Larsen B is significant mostly in its lesson that change in Antarctica can happen more quickly than scientists had previously thought possible. “Its importance is that it shows what will happen to the huge glaciers farther south once their ice shelves break up to the point of no return.”

Next up for collapse is the Larsen C, the size of Scotland, which has been around for 150,000 years. Should it disappear, it could require a re-write of sea level rise plans for coastal cities worldwide. Last August, I wrote about what that near-term worse case scenario might look like: Should its melt rate continue to trend above previous estimates, Antarctica may produce an extra foot of sea level rise by 2100, which would pose a threat to low-lying coastal areas worldwide. (For example: A post-Sandy study of New York City’s flooded subway system showed one tunnel escaped flooding by just three inches, saving the city hundreds of millions of dollars.) A new study on Larsen C, which now has a giant crack in its surface, showed that it’s now melting both from above and below, thanks in part to warmer ocean temperatures.

Rignot is most concerned about the Ross Ice Shelf and the Filchner-Ronne Ice Shelf, Antarctica’s largest, both of which are bigger than California and more than a thousand feet thick. Though these ice shelves are thought to be stable for now, a fact sheet from the U.S. Geological Survey says that the glaciers kept in check by the Ross and Filchner-Ronne could create a “rapid rise” in global sea levels of more than 30 feet, enough to flood about a quarter of the U.S. population.