With 9.2 Million Employed by Renewable Energy, is the Jobs Myth Finally Bust? 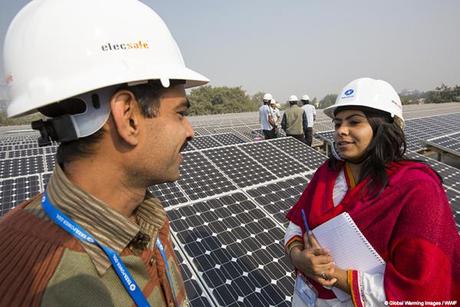 “Renewables will do close to nothing to contribute to overcoming unemployment.”

“Renewables will create massive job losses in other industries.”

Many of us have heard these lines a zillion times in the past – and I am sure we will keep on hearing those myths in the future, especially from the various interest groups nourished by the fossil fuel and nuclear industries.

One strategy political opponents use in arguments is to respond to fictional statements which were never released. A classic one is “The global climate has always changed for natural reasons and many million years back it was about 10 degrees warmer than today – a time when no fossil fuels were used”.

No one has ever disputed that. The difference is that natural climate change occurred in past millennia at a slow pace – today, with human interventions and emissions in the atmosphere, it is happening much faster.

Part of the solution

It’s the same with the renewable energy and unemployment argument. No one ever said that renewables will play a major role in solving unemployment. Overcoming high unemployment in any country or region requires social actions and government interventions on a myriad of industrial and business policy fronts and sectors. Renewables – just one sector of industrial development – can’t be held responsible for that scale of change.

But fact is that renewables create (on average and based on the specific technologies) between three to six times more jobs for the same amount of energy produced than fossil fuels or nuclear. By no means do renewables aggravate the unemployment problem – they are a fundamental part of the solution. Everywhere.

The World Coal Association, the lobby group of the coal industry, states that coal provides up to 7 million jobs. The employment numbers for oil & gas industries combined amount to up to 6 million people based on various upper range statements by the sector. Some argue the numbers are significantly lower. Still, let’s work with those for the sake of the argument. It’s impressive anyway.

The so-called ‘new renewables’ (solar and wind) alone employ more than four million people across the globe, while delivering ‘only’ five percent of all electricity. Compared to the 40% of global power that comes from coal, solar and wind provide almost five times more jobs per kilowatt-hour.

No surprise then that the renewable giants in the world have the largest renewable energy employment figures, with China having a share of almost four million people alone. Germany’s almost 400,000 jobs in the clean sector trump by factor nine the people employed in the nuclear sector, for instance, at its height when it provided about one third of all power in the country – one third is now the share of renewable electricity.

So we can easily say that potential job losses in the incumbent sector are more than compensated by new and clean energy sources. The myth of job destruction is refuted and shown to be non-existent. But can we really say this?

We should not. We also have a social responsibility, particularly environmental NGOs like WWF. A global Energiewende only functions if “no one is left behind” when creating societal consensus of this emerging third industrial revolution of a fully renewable powered world economy.

Of course, that does not include the highly-paid white collar jobs in the incumbent fossil and nuclear industry that still carry on to pave the way for climate and energy chaos. But we must be supporting our colleagues and comrades, the blue collar jobs, in the respective industries. Not easy I know. Many prejudices and sentiments prevail on both sides.

New jobs created in the renewable energy sector are regionally and personally distant from the job losses of a fossil fuel industry worker. Staff benefitting from renewable energy expansion are often highly skilled, urban and flexible. That is very different from a coal miner or a gas pipeline worker. One does not make an offshore oil driller in the Gulf of Mexico into a solar PV engineer in San Francisco.

This is about the ‘just transition’. We as civil society need to support trade unions and the workers to embark on a smooth and fair pathway, including re-skilling, training, and not the least compensation for job losses. It won’t be easy for all and it won’t come without harsh conflicts.

But if we don’t make that effort, we lose a large opportunity and social responsibility. If we, however, do so credibly and honestly, we enhance our support base for moving away from nuclear and fossil fuels towards renewables.

And that helps all to understand that the opponent is not the worker in an open pit mine who probably has no other job opportunity. But it is the large coal company’s fat-earning executives that have their spin doctors under tight control. Let’s make sure that their employees increasingly don’t trust them anymore and work with us instead.