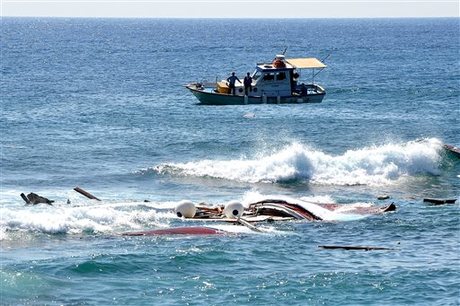 EU foreign ministers formally approved Monday the launch of the first phase of a military operation to target people smugglers in the Mediterranean, officials said.

The initial ships and aircraft to conduct intelligence gathering missions should be available within a week, officials said.

EU foreign affairs head Federica Mogherini said the 28-nation bloc had responded quickly to the crisis washing up on its southern shores.

"I am impressed by the unanimity and speed with which we have put this together," Mogherini said as she arrived to chair the foreign ministers meeting.

The decision comes after serious differences among member states over how to handle the thousands of migrants crossing the Mediterranean, with Italy, Greece and Malta bearing the brunt of the burden.

The loss of up to 800 people in April when their rickety boat sank forced the issue after the bloc late last year had actually scaled down its search and rescue operations off southern Italy to Rome's dismay.

EU leaders agreed at an emergency summit overshadowed by the disaster to formulate a comprehensive plan to tackle the problem at source, including a military option to go after the people traffickers working out of Libya.

The first phase of intelligence gathering is meant to be followed by active intervention to board and disable smuggler vessels and arrest the traffickers.

A third phase would extend these actions into Libyan territorial waters and possibly inside the country itself -- a major and potentially dangerous commitment that some member states are reluctant to take on.

To meet their reservations, the April summit agreed that advancing to Phases 2 and 3 would require a U.N. Security Council Resolution and agreement from Libya where rival factions are fighting for control and the internationally-recognized government has fled Tripoli to take up residence in Benghazi.

Mogherini recalled that the EU is doing everything possible to broker an accord between the Libyan factions on a government of national unity but progress appears limited.

Russia, a permanent and veto-wielding UNSC member, has made clear it wants to see Libyan consent before any resolution is passed.

A senior EU official who asked not to be named said that commanders were aware of the dangers in the operation, noting the presence of the radical Islamic State jihadi group in Libya and recent attacks on merchant shipping by the rival factions.

Mogherini said the mission would target the "business model of those who benefit from the misery of the migrants."

She stressed, however, that the military option should be seen as only part of a broader strategy to deal with a problem taking on Biblical proportions.

Some 100,000 migrants have crossed the Mediterranean so far this year, most of them landing in Italy, Greece and Malta which all want their EU peers to share more of the burden.

Ministers last week failed to reach agreement on the Commission's proposals, with many member states wary over migration which has become a hugely sensitive political issue driving gains for far-right and euroskeptic parties.

"As the EU, we are determined to contribute to save lives, dismantle the networks of the smugglers of human beings and address the root causes of migration," Mogherini said.