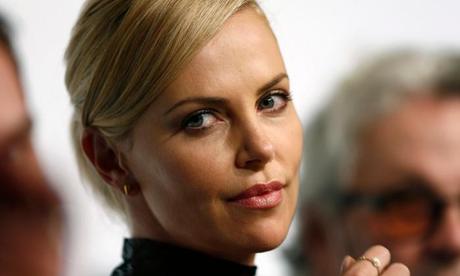 The actor Charlize Theron, who takes a leading role in the new Mad Max movie as a one-armed warrior driving five sex slaves to safety, has expressed her fears that a bleak future awaits the planet unless global warming is addressed.

The film is set 45 years in the future, in a post-apocalyptic world desperately short of water and fuel and ruled by a barbaric dictator who enslaves men and imprisons women for breeding and breast-milk.

“It felt very grounded in real events,” said Theron at a press conference for the film, which opens worldwide this week, following its gala premiere at Cannes on Thursday. “The idea of globalization and global warming and drought and the value of water, and leadership becoming completely out of hand.”

Theron said that when she first watched a scene in the film depicting a terrifying thunder-and-sandstorm she wondered if it was a little far-fetched. “But there are images on Google right now of Sahara desert sand being blown, in that state, all through Africa. And that’s frightening. The hair lifted up on the back of my neck. What makes [the film] even scarier is that it is something that is not far off if we don’t pull it together.”

Fury Road, the first in the franchise since 1985’s Beyond Thunderdome, shot for eight months in Namibia after writer/director George Miller’s native Australia – where the first three were filmed – turned unexpectedly verdant after a rainy season. Conditions on set mimicked those depicted in the film, with the airport usually closed due to dust and a waiting list if you wanted fresh spinach. Theron, who comes from South Africa, praised the country’s beauty but said she could understand why its original name translated as “the place that God created when he was angry”.

Theron stars alongside British actor Tom Hardy, who takes on the role of lone wolf former traffic-cop Max – a part which first made Mel Gibson famous. The actor doesn’t feature in the new film, but George Miller reported that Gibson did give it his blessing at the premiere. “Mel is someone who, in a sense, cannot lie,” said Miller, “and I heard him chuckling.”

When the film was first scripted at the end of the last century, Gibson had been due to be involved. But production stalled and Gibson’s age – plus his much-publicized brushes with the law – were felt to be contributing factors towards the appointment of a replacement. Added Miller: “I was heartbroken to see what was happening [to Gibson]. I’ve always known him to be a really, really good man.”

Fury Road has been very warmly received by critics, both on its own terms and for injecting some blockbusting razzle-dazzle into a Eurocentric lineup at Cannes. The budget for the film was $150m (£95m), a figure it’s projected to recoup in the US alone.

Hardy is reportedly signed up for three more installments and a separate live action show is also apparently in the works. But Miller, now 70, suggested a pause might be necessary before work on follow-ups began.

“I feel like a woman who’s just given birth to a really big baby. And then someone says: ‘When are you gonna have your next one?’”