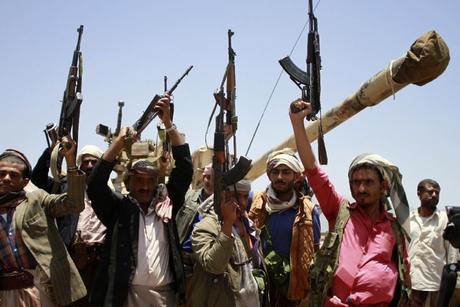 Gunmen have shot dead a Huthi rebel commander in the Yemeni capital, as the insurgents came under attack elsewhere in the country, an official and tribal sources said on Friday.

The men, on a motorbike, attacked low-ranking officer Ibrahim Hassan al-Sharfi near his Sanaa home late Thursday before they fled.

And in the main southern city of Aden, rebel mortar fire on residential areas and a medical center on Friday killed three civilians and wounded seven, a medical source at the city's Al-Naqib hospital said.

The rebels have been targeted by a Saudi-led air campaign that began in March, as they remain locked in battle with pro-government fighters, Sunni tribesmen and southern separatists.

A government source in Aden told AFP that a Yemeni force of around 400 coalition-trained fighters reached the port city late on Thursday. No more details about the force were immediately available.

Al-Qaida and the Islamic State group have also carried out several deadly attacks against the rebels.

Meanwhile, the Saudi-led coalition carried out air strikes against a rebel-held army camp in the central city of Baida and also hit their positions in oil-rich Marib province in the east, witnesses said.