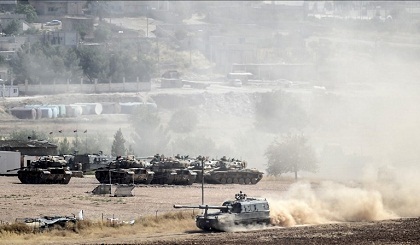 Kurdish fighters ousted the Islamic State group from the Syrian border town of Kobane on Saturday, two days after the jihadists had seized several neighborhoods, a monitor and activists said.

IS's bloody attack on the town had left at least 174 civilians dead as well as 70 combatants, the Syrian Observatory for Human Rights said.

"The Kurdish People's Protection Units (YPG) took back control of IS positions in Kobane," the Britain-based group said.

"The YPG were able to take back the town's boys' high school, where the last of the IS fighters were holed up, after setting off explosions."

The jihadist group entered Kobane at dawn on Thursday, seizing several buildings in the town's south and southwest.

Hours later, YPG reinforcements encircled the IS positions -- where the jihadists were holding civilians -- and slowly began retaking control of the buildings.

Local journalist Rudi Mohammad Amin told AFP that "all of Kobane is again under the control of the YPG."

"The YPG detonated explosives outside of the school, then stormed it," Amin said, speaking via the Internet from a position near Kobane.

"This military operation was carried out after ensuring that there were no civilians left in the school," he added.

Amin said he believed all the IS fighters in the school were killed.

According to the Observatory, which monitors the war in Syria through a network of contacts on the ground, YPG fighters and members of the Kurdish security forces were searching the town for any remaining jihadists.

At least 174 civilians were killed in the jihadists' assault on Kobane, 148 of them in the town itself.

At least 16 Kurdish fighters were killed and 54 jihadists.

Bravo Kurdish fighters, kick these evil sods out, no sooner did they regain a foothold in Kobane than they started killed innocent people. I hope they catch as many IS fighters and treat them in the very same way they treated their victims, show them no mercy.

isis are erdogan's mother's grandchildren, the spawn of terrorism.

you just realized it
it is also children of S. Arabia, Qatar and of course Isreal

Yup obviously, Erdogan sent these Terrorists from Turkey. Erdogan is the biggest supporter of Daesh. The Islamic state will not be able to supply abd replenish its ranks thus ensuring its demise if Turkey seals its borders. Turkey has 500,000 strong military and another 1 million troops in reserves which can easily seal Turkey's border.