More than 200 Injured in Explosion at Taiwan Water Park 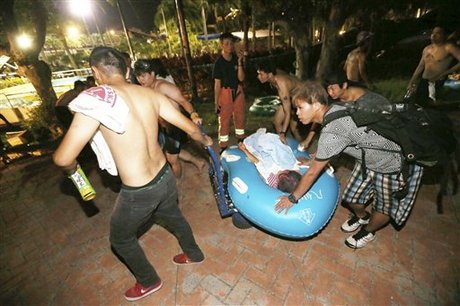 More than 200 people were injured, over 80 of them seriously, in an explosion at a water park outside Taiwan's capital Taipei Saturday after colored powder being sprayed onto a crowd ignited, officials said.

"Our initial understanding is this explosion and fire... was caused by the powder spray. It could have been due to the heat of the lights on the stage," said a spokesman for the New Taipei City fire department, adding that 205 had been hospitalized including 81 who are seriously injured.

The blast happened as hundreds were reported to have gathered for an event at the coastal Formosa Fun Coast waterpark, just outside the capital Taipei.

Television images showed the stage on fire and crowds running away some of them only dressed in swimwear and covered in colored powder.

One male witness told local news channel CTI: "It started on the left side of the stage. At the beginning I thought it was part of the special effects of the party but then I realized there was something wrong and people started screaming and running."

Media reports said some victims had suffered burns to more than 40 percent of their bodies.

Fire agency officials said it had been difficult for ambulances to access the site with many having to be carried away on stretchers.

"I've ordered the park to shut down immediately and be placed under a rigorous investigation."