U.S. Envoy Urges Lebanese 'Not to be Late' for Energy 'Party' 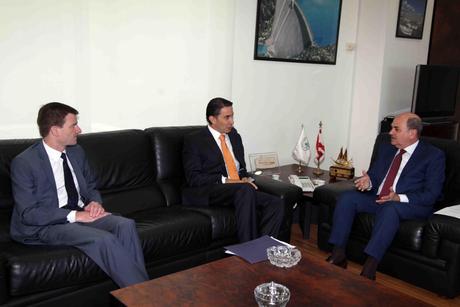 The U.S. Special Envoy for International Energy Affairs at the State Department has stressed that the solution to the exploration of Lebanon's offshore oil and gas lied in the hands of the Lebanese.

Amos Hochstein, who is currently on an official visit to Lebanon, told An Nahar daily in remarks published on Thursday that “it was time for Lebanon to issue oil decrees and start working.”

“The solution is in your hands,” he said.

“The issue is more complicated than just drawing a line on a map,” Hochstein said about calls for the demarcation of the maritime border with Israel.

“Gas prices have dropped and opportunities in the world are growing and some countries are developing,” the U.S. envoy told An Nahar, advising the Lebanese “not to arrive late for the party.”

Sharp differences among Lebanese officials have stalled the endorsement of two oil decrees that are needed to start exploration.

The first decree tackles the demarcation of the 10 maritime oil blocks and the second is linked to setting up a revenue-sharing model and tackles the contracts signed with the international companies.

Several Lebanese officials have warned that the delay in the government's approval of the decrees has given Israel the opportunity to siphon Lebanon's offshore gas and oil through fields that lie only a few kilometers from the country’s territorial waters.

Al-Liwaa daily quoted the envoy as saying that the U.S. is ready to assist Lebanon in the demarcation of its maritime border.

The Lebanese officials insisted that the process should be carried out through the United Nations, informed sources told the newspaper.

The iranian resistance will demarcate the maritime borders and no need for U.S help.

The Lebanese are late because they are still discussing the percentages for each.

The American ambassador is breathing down your necks, urging you to jump-in and stake your claims to Med. Gas profits. Never mind, whether it is necessary to draw another Middle East line at this time. Israel cannot "slant-drill" your gas until they manage to begin their own production and marketing. Israeli populist concerns about gas monopolies overcharging for domestic gas will eventually be settled, but no one yet has raised the cost of cleaning-up the high-pressure gas from Leviathan, or finding a third partner for Israel's gas oligarchs.