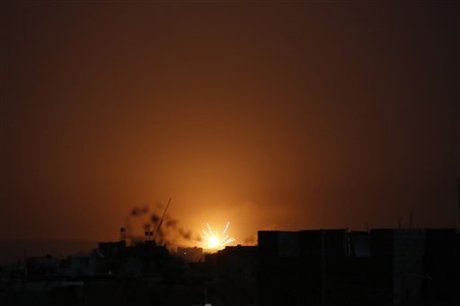 The attack on the offices of the General People's Congress (GPC) caused "some deaths" among employees and guards of the building in the south of the capital, party official Faeqa al-Sayed said.

It came as some GPC members were meeting the U.N.'s Yemen envoy Ismail Ould Cheikh Ahmed in another part of the city.

Sayed called the attack "an attempt to derail the UN envoy's mission".

Cheikh Ahmed arrived in Yemen on Sunday and called for a humanitarian ceasefire after months of conflict in the impoverished Arabian Peninsula nation.

"As we were conducting consultations with the U.N. envoy to find solutions to the political crisis gripping the country... Saudi forces bombed the party headquarters, killing employees and guards and destroying the building," Sayed was quoted as saying by the GPC's news site, Almotamar.net.

Farther south in Lahj province, coalition warplanes struck a market in an attack that a provincial official said was "accidental" and killed 41 people, believed to be mostly civilians.

Another 34 people were wounded in the strike, the official said, adding that rebels sometimes station military convoys in the market.

AFP could not confirm if the casualties were all civilians, and there was no immediate explanation from the coalition leadership in Saudi Arabia.

Another air strike targeting a rebel-held government building in adjacent Aden also hit a nearby home and killed five residents, a provincial official there said.

The Saudi-led coalition began a campaign of air strikes against the Huthis and their allies in March after the insurgents seized Sanaa and then advanced south, forcing the government to flee to Riyadh.

Upwards of 2,800 people have been killed in Yemen since March, according to U.N. figures.

Saleh, who ruled for 33 years before being forced from power in 2012 after a bloody year-long uprising, threw the support of his loyalists in the army behind the Huthis.