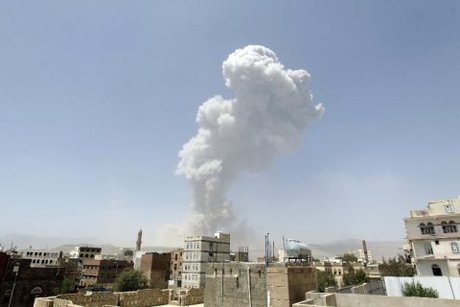 Saudi-led coalition warplanes bombarded Yemeni rebels Sunday, witnesses said, in a new blow to a U.N.-proposed truce in the impoverished country where millions are threatened with famine.

Air strikes hit the Shiite Huthi stronghold of Saada in Yemen's north, as well as other rebel positions south of the capital Sanaa and in the southern province of Lahj, residents said.

Clashes also raged in the southern port city of Aden between the rebels and fighters allied with exiled President Abedrabbo Mansour Hadi, known as the Popular Resistance.

The southern fighters managed to push back the rebels in the coastal Ras Amran area, west of Aden, according to General Fadhel Hasan, a spokesman of the Popular Resistance.

"We have seized control of the area that represents the western entry into Aden," he said, adding that the group "received sophisticated weapons from the coalition."

Clashes also persisted in the central city of Taez and in the southern Shabwa province, where the Popular Resistance said 21 of its fighters were killed in three days of clashes.

The U.N.-proposed humanitarian truce technically went into effect at 2059 GMT Friday and is supposed to run until July 17, the last day of the Muslim fasting month of Ramadan.

But the ceasefire, much needed to rush food supplies to a population threatened by famine, has been flouted by strikes conducted by the Saudi-led coalition and fighting on the ground.

The ceasefire was declared after U.N. chief Ban Ki-moon received assurances from Hadi and the Huthis that it would be respected.

The coalition said it has not received a formal request from Hadi's government to observe a truce, while the rebels said before the ceasefire went into effect they had little hope it would succeed.

The United Nations has declared Yemen a level-3 humanitarian emergency, the highest on its scale, with nearly half the country facing a food crisis.

More than 21.1 million people -- over 80 percent of Yemen's population -- need aid, with 13 million facing food shortages, while access to water has become difficult for 9.4 million people.

The U.N. says the conflict has killed more than 3,200 people, about half of them civilians, since late March.

Fighting had intensified after the northern rebels overran the capital unopposed in September and went on to advance on several regions, including Aden where Hadi took refuge after escaping house arrest in Sanaa.

The rebels are allied with troops loyal to former president Ali Abdullah Saleh, who stepped down in 2012 following a year of nationwide protests against his three-decade rule.