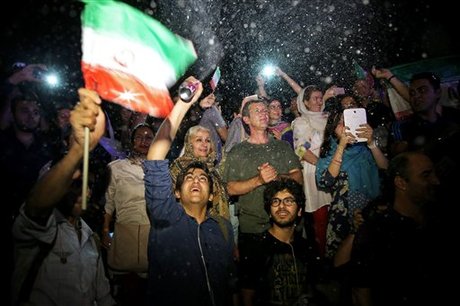 Lebanese politicians had on Wednesday mixed reactions to a historic accord struck a day earlier by Iran, the United States, and five other world powers to check Tehran's nuclear efforts short of building a bomb.

Free Patriotic Movement leader MP Michel Aoun said the deal could have a positive impact on Lebanon's presidential elections. But stressed that granting Christians their rights cannot be influenced by any change in the world.

Aoun told As Safir daily that some parties are trying to describe his call for giving back the rights of Christians in state posts as a sectarian demand.

But he stressed that these are patriotic rights.

“A strong president benefits all of the country and an electoral law would be fair towards all Lebanese,” said the presidential candidate.

Like Aoun, his ally Marada Movement MP Suleiman Franjieh, expected the nuclear deal to have positive effects on Lebanon and the region.

“Lebanon's insurmountable crisis is part of the critical situation in the region,” he told As Safir. “When a solution appears in a regional deadlock, it would surely have positive repercussions on us.”

Both Aoun and Franjieh are allied with Hizbullah, which is backed by Iran, in the March 8 alliance.

The 100-page deal between Iran and the world powers caps off more than a decade of diplomatic wrangling aimed at keeping Tehran from building a nuclear bomb. U.S. and Israeli officials say a nuclear-armed Iran would be a security disaster and potentially lead to war because of Tehran's support for anti-Israel groups, such as the Palestinian Hamas and Hizbullah.

Progressive socialist Party chief MP Walid Jumblat, who is a centrist, was also quick to react to the deal.

He expressed pessimism, however, over the deal's effects on Lebanon and the region.

He said the gains made by the major powers would be much more than Arabs.

Lebanese Forces chief Samir Geagea, who is a member of the anti-Hizbullah March 14 alliance, also believed in remarks to As Safir that the deal would not have major positive repercussions on events in the Middle East.

Asked if the deal would give Hizbullah the upper hand in Lebanese politics, Geagea said: “Not necessarily. Even if it improves its capabilities, its size is limited in Lebanon because the party cannot overstep the Lebanese (political and sectarian) structure.”

The head of al-Mustaqbal parliamentary bloc, MP Fouad Saniora, said at a press conference he held in parliament that the nuclear deal is an “important event.”

“We Lebanese and Arabs had a clear stance that each state has the right to pursue peaceful nuclear activities,” he said.

“We enjoy a long history of ties with Iran,” he added.

For his part, Justice Minister Ashraf Rifi from al-Mustaqbal bloc stated : “We honor any agreement that reflects positively mainly on Lebanon. However let us wait and see how the issue is echoed on the ground.”

Wlak ya Samir ...it seems the throne in Baabda is getting further and further away...akhhhhh akhhhhh..in a couple of months,i think not even the Hubble telescope can help you to see even a glimpse of it..wlak akhhhhh ya baba..

Gaegae is not as obsessed with becoming the President as GMA (are you sure you are addressing the right person here). From day one Gaegae was for a consensual candidate if that is what it takes to elect a President. GMA on the other hand is stuck on AOUN or NO ONE.