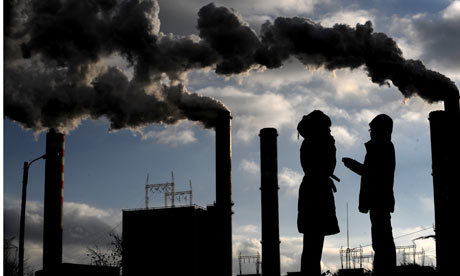 Copenhagen says it is on track to become the world's first carbon neutral capital by 2025, but even after emissions fell more than expected some critics dismiss the plan as a vanity project.

The Scandinavian city launched its carbon neutrality scheme in 2009, when it hosted the UN Climate Change Conference.

Visitors to the Danish capital quickly become aware of its clean energy credentials: one of the first things seen while flying into the airport is an offshore wind farm.

After they have landed, one of Europe's newest and most modern metro systems takes tourists into the city center, and once there, many of them come dangerously close to a cyclist hurtling down one of Copenhagen's many cycling lanes.

While the 2009 climate meeting ended in failure, Copenhagen has so far managed to cut emissions more than expected.

Carbon emissions were to have fallen by 20 percent in 2015 from the 2005 level. But by 2014 they were already down by 31 percent, and this despite the city's population growing by 15 percent in the same period.

Some of those gains were due to a series of unusually mild winters, meaning people used less energy for heating. There were also more windy days than projected, resulting in more energy from the city's wind turbines.

"The big changes will take place between 2016 and 2018. That's when our power stations will be converted from traditional fuel to fossil free fuel," said Morten Kabell, the city's mayor for technical and environmental affairs.

Both measures have been criticised by experts.

Biomass made from wood is considered to be carbon neutral by the EU since the new trees that are planted will eventually absorb the carbon emissions that came from burning the ones that were cut down.

However burning wood is only carbon neutral if the land is reforested, and even then there is a time lag of up to 100 years before the carbon "debt" has been neutralised by new trees.

In the meantime they contribute to rising carbon dioxide emissions. If the wood is shaped into pellets and shipped overseas its carbon footprint grows further.

To claim biomass was carbon neutral amounted to "a falsification of the accounts," said Klaus Illum, an energy consultant a vocal critic of Copenhagen's 2025 target.

Kabell said that he was personally against using biomass to reach the 2025 target, but added that the city had taken steps to ensure it only used sustainably sourced wood.

The other major component of Copenhagen's switch to clean energy involves erecting more than 100 wind turbines in and outside the city, which on windy days would produce enough energy to sell surplus power to other parts of Denmark.

That will help the capital offset its remaining carbon emissions, but once all of Denmark's heating and electricity needs are met from renewable sources in 2035, it will have to look abroad to get credits to be able to claim it is carbon neutral.

"The whole accounting exercise works only if others are still using fossil fuels that Copenhagen's unpredictable wind power can replace," Bjorn Lomborg, an academic known for his contrarian views on climate change, wrote in an opinion piece where he dubbed the 2025 target a "costly vanity project."

Meanwhile, some environmentalists believe the term "carbon neutral" is misleading as it does not include major sources of carbon emissions such as food, air travel and the consumption of goods produced outside Copenhagen, which includes virtually everything sold in the city's shops.

By contrast, it does include the wind energy that Copenhagen plans to produce at wind farms outside the city limits.

"If Copenhagen can become 'carbon neutral' by investing (in wind turbines) outside the municipal borders, all of Denmark can do the same by investing in other countries," Illum said drily.

Unlike the free market-leaning Lomborg, environmentalists have criticized the Copenhagen 2025 plan for placing too little emphasis on cutting emissions through reducing consumption.

A "congestion charge" for vehicles entering Copenhagen -- included in the original plan -- was scrapped by the Danish government in 2012 after a public outcry, suggesting there was a limit to how much Danes were willing to change their lifestyle for the sake of the environment.

But even if all the 2025 targets were to be met, consultancy group Niras estimates that the carbon footprint of a Copenhagen resident will only have fallen by 20 percent.

The other 80 percent were the result of their "demand for products and services," it said in a report last year.

"Those aren't things we as a city can regulate," said Kabell.

"We have to be open about the fact that we can only solve part of the problem," he added.