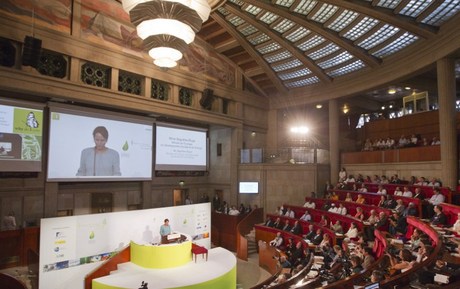 France signaled a "breakthrough" Tuesday at 46-nation talks in Paris tasked with paving the way for a highly-anticipated climate rescue pact to be inked in December.

Crucially, they concurred there should be a regular, five-yearly review, once the agreement kicks in, of the collective effort to curb planet-warming greenhouse gases.

"This is a breakthrough," said Tubiana. "That was not obvious to get."

The political signal emerging from the Paris talks will now filter down and hopefully ease the job of rank-and-file negotiators for the 195 countries crafting a historic global agreement.

The Paris talks were not part of the official negotiations, and fewer than a quarter of countries were directly represented.

But all the world's top greenhouse gas emitters, apart from Russia, were represented, as were all recognized negotiating blocs.

"The French initiative to engage ministers early and often is a clever one. It's a move that will help to ensure success in Paris," he told AFP.

"The process needs a political nudge. Having ministers talking to each other, sitting around eye-to-eye, that helps to move things along."

The pact to be finalized at a November 30-December 11 U.N. conference in the French capital will have as its goal to limit average global warming to two degrees Celsius (3.6 degrees Fahrenheit) over pre-Industrial Revolution levels.

It will be supported by a roster of voluntary national pledges. But scientists say that those already submitted indicate the world will badly miss the 2 C target which is considered the threshold for disastrous impacts.

Tubiana said consensus also emerged at the ministerial meeting on the need for regular reporting on national action.

"There are still a lot of details to be worked out, but the idea of everyone accepting to be verified within a common framework is very significant," she said.

Convergence around issues like these mean the global agreement, due to take effect from 2020, will be "durable" and not need to be renegotiated 10 years later, the minister said.

French President Francois Hollande, speaking at a "Summit of Conscience for the Climate" elsewhere in the capital, insisted Tuesday that an ambitious agreement "must be found."

"Today, with the agreement we see taking shape, we are still above two degrees Celsius, and probably three," he said at the gathering attended by religious and moral leaders headlined by U.N. chief Kofi Annan.

But a viable deal would mean "forsaking the use of 80 percent of fossil-based energy resources to which we still have easy access," the president said.

French Foreign Minister Laurent Fabius, who will preside over the year-end U.N. meeting, described the ministerial huddle as "constructive", and said it "has enabled progress towards the adoption of an ambitious climate accord in Paris."

For a reasonable chance of staying under 2 C, they said in a joint statement, "we must transition to a zero-carbon world by early in the second half of the century."

A "zero-carbon world" is shorthand for a global economy that, on balance, is not adding any more carbon dioxide into the atmosphere.