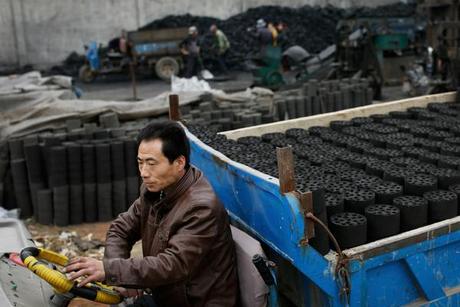 Blue skies in Beijing were a welcome surprise this week for the residents of Gaobeidian, a migrant neighborhood on the outskirts of the city.

Gaobeidian sits near the smokestacks and cooling towers of an 845-megawatt power plant, the last coal-fired plant operating in the Chinese capital. Billowing smoke forms a hazy backdrop as children play and women hang clothes out to dry.

“This kind of weather is rare in Beijing,” says Cheng Hui, a housewife with two sons under four. She’s happy to hear that the plant will soon close, especially so her sons can stop breathing the hazardous air pollution.

China relies on coal for 66 percent of its energy use. But Beijing plans to close this plant next year, leaving it as a relic of the country's energy use amid its headlong economic growth. Plans are to refurbish the Gaobeidian plant to burn natural gas.

“It will be better for everyone,” says Ms. Cheng.

Shuttering the plant is a small but symbolic step in China’s $6.6 trillion push to reduce greenhouse gas pollution by 2030, a plan it says it will begin in earnest after 2020.

On Tuesday, Beijing committed to a set of wide-ranging goals in anticipation of an international deal on climate change that governments hope to reach later this year in Paris. Reducing coal use is at the center of its pledge.

China’s economic boom has depended on the carbon-rich fossil fuel. The country’s coal consumption and GDP in the first decade of this century followed parallel growth of about 9 percent to 10 percent per year.

Coal has also led China to become the world’s biggest emitter of greenhouse gases. In 2013, some 29 percent of the world’s carbon emissions came from China – twice the amount released by the United States, the second largest polluter.

But public concern about air pollution has pushed China to cut its use of coal, which fell nearly 3 percent in 2014, the first drop in more than a decade.

The sudden decline has led some analysts to speculate that China’s carbon emissions could peak sooner than 2030. Many argue the proposed steps still fall short of what the country could and should achieve.

Fuqiang Yang, a senior adviser on climate change and energy policy in Beijing for the Natural Resources Defense Council, says it’s “highly possible” for emissions to stop rising as early as 2025. He says that the government tends to under-promise and over-deliver.

For its part, Beijing pledged in its proposal to make its “best efforts” to hit peak emissions earlier.

“China has done its duty,” says Changhua Wu, Greater China director of the Climate Group, an international environmental organization. “If we’re able to overachieve, then even better.”

Such positive readings aside, China has a long way to go to reduce its dependency on coal. It accounted for 69 percent of the 3.2 billion-ton increase in global coal production over the past decade. It now consumes nearly as much of the fossil fuel as the rest of the world combined.

Mr. Yang estimates China is on pace to reduce its percentage of coal use from about 65 percent of total energy to below 60 percent by 2020 – and to as low as 25 percent by 2050.

A recent study from the London School of Economics estimates coal use here is likely to plateau over the next five years. Natural gas and renewable energy sources will likely take its place.

Beijing wants to increase the use of "non-fossil fuels" – such as renewable and nuclear energy – in its energy mix, to 20 percent by 2030. It’s already the world's biggest investor in green energy, spending more than $90 billion in 2014 alone.

For the residents of Gaobeidian, where clear skies are a rare sight, China's transition away from coal can't come soon enough.