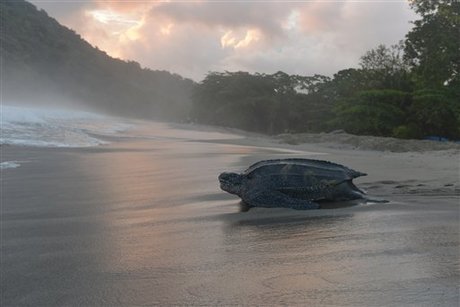 Eggs buried by female turtles in usually "high and dry" areas on beaches could be inundated by rising sea levels and storm surges, a study by researchers from Australia's James Cook University said.

Eggs submerged for one to three hours did not experience a "significant level" of mortality but those underwater for six hours saw a 40 percent rise in turtle embryo deaths.

"We are trying to anticipate the early effects," lead researcher David Pike said.

"In some places it only takes a small rise in sea levels, when combined with a storm or a king tide, to inundate what had previously been secure nesting sites."

Pike said one way to protect the eggs was by using volunteers to move the nests further away from the shoreline.

"We might be able to save them with people power," Pike said.

"The Queensland Department of Environment and Heritage Protection has also been out moving sand around the island to provide turtles with higher elevation nesting sites."

The green turtle population on Raine Island, which is located on the northern tip of the Great Barrier Reef off Queensland's coast, is also under threat from habitat loss, boats and pollution.

As many as 60,000 female green turtles swim from breeding grounds in countries such as Indonesia and Papua New Guinea to the island to lay their eggs during nesting season.