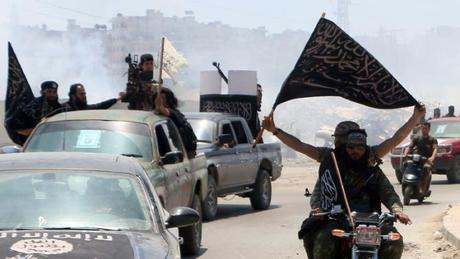 At least 10 people were executed on Saturday in Syria's Aleppo city on the orders of a religious court dominated by al-Qaida affiliate Al-Nusra Front, a monitor said.

The Syrian Observatory for Human Rights said two of the executed were accused of adultery, with the rest accused of collaboration with the Syrian government.

The executions, in the eastern Aleppo neighbourhood of Shaar, were ordered by a religious court that includes several conservative rebel groups but is dominated by Al-Nusra Front.

All 10 men were shot dead, the Observatory said.

Islamic courts have been set up in many towns and villages in Syria taken from government forces by Islamist militants or jihadist groups.

Al-Nusra has also carried out summary executions of government troops in areas it has captured.

More than 230,000 people have been killed in Syria since the conflict started in March 2011 with anti-government protests.

Stone age mentality and primitive creatures, With this frozen in time mentality those creatures will never become civilized. The Middle East ought to be proud of them