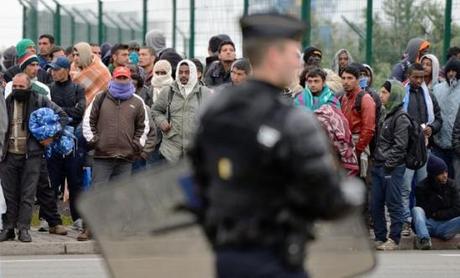 Rival protests featuring those welcoming migrants and far-right wingers opposed to their presence were held in the British port town at the mouth of the Channel Tunnel on Saturday.

Small groups gathered in Folkestone, southeast England, with.around 20 people in support of the migrants, while about 30 others turned out to protest against immigration.

"We are here to make it clear to the migrants that many people here would welcome them and that the way they are being treated is not in our name," said Bridget Chapman, organizer of the pro-migrant demo.

Nearby right-wingers chanted: "Britain first, taking our country back."

"British people don't want immigration," said Paul Goding, leader of the Britain First party. "We are a small overcrowded island. We haven't got enough space for our own people, let alone a torrent of mass immigration into this country."

On Monday night, migrants on the French side of the Channel Tunnel in Calais made more than 2,000 attempts to enter the Eurotunnel terminal, the peak of recent disruption.

French police said Saturday some 300 migrants in Calais attempted to reach Britain overnight, a significant drop as the security presence has been beefed up.

According to a new opinion poll released by the European Commission, immigration is the main concern of Europeans, ahead of economic problems and unemployment

A similar poll last November had the economic situation, employment, and public deficits top of the list.

Since then immigration has been a hot topic, with Italy, Greece and Malta having to deal with unprecedented arrivals by sea from Africa and the Middle East.

Every single one of those in favour of the migrants should get arrested, and the sole condition of their release is that one of the migrants is attached to them, and they are responsible for all the expenses with regards to that migrant. I'd like to bet that that person will not demonstrate again