Two Die, Thousands Flee as Typhoon Bears down on Taiwan 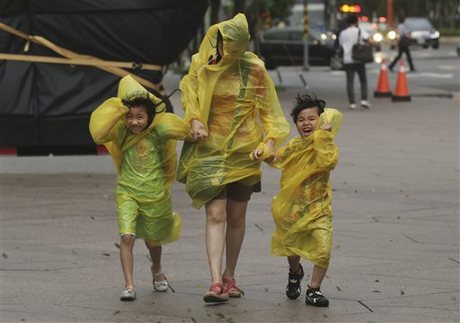 An eight-year-old girl and her mother died after being swept out to sea off Taiwan as Typhoon Soudelor bore down on the island, forcing thousands to flee, officials said Friday.

Troops evacuated villagers from remote mountain regions in the east of the island and helped secure their homes as rains and surging waves battered the coast.

More than 2,000 people, many of them tourists, had already been evacuated from Taiwan's outlying islands.

The typhoon is set to make a direct hit on the east coast in early hours of Saturday before moving across central Taiwan to Fujian province in mainland China.

Billed as the biggest typhoon of the year earlier in the week, Soudelor has since weakened but authorities warned it may strengthen again before making landfall.

The young girl and her mother became the first casualties of the impending storm after they were swept out to sea in Taiwan's eastern Yilan county on Thursday.

The dead girl's twin was also missing in the same incident, while another nine-year-old girl was injured but survived.

"The group went to the beach but were swept out to sea by strong waves," a spokesman for the fire bureau in Yilan County told AFP.

"It was a mother, her twins, and a friend's daughter. The adult and her daughter had already lost their heartbeat when brought to shore. The other child was conscious.

"The search for the missing girl stopped for today as it was getting dark but will continue."

Troops helped move residents from aboriginal villages in the eastern counties Yilan and Hualien on Friday afternoon as well as reinforcing their houses, which will bear the brunt of the storm.

Riverside aboriginal communities in New Taipei City were also due to be evacuated Friday evening.

Much of the island will be lashed by torrential rain and by Friday afternoon 140 millimeters (5.5 inches) had already fallen near Taoyuan City in the northwest.

Offices and schools were shut down Friday, mainly in the north and east.

More than 40 international flights out of Taiwan were canceled and ferry services to outlying islands were suspended.

Packing maximum wind speeds of 173 kilometers per hour (108 miles per hour) near its center, Soudelor was 280 kilometers southeast of Hualien county Friday evening.

Currently described as a "moderate typhoon" by Taiwan's Central Weather Bureau -- the second highest category -- it could be raised to the top category of "severe typhoon" if wind speeds near the center reach more than 184 kilometers an hour.

"We don't rule out the chances Soudelor could strengthen later," said the weather bureau.

Soudelor had been described as a "super typhoon" by the Hong Kong Observatory earlier in the week as it reached maximum sustained wind speeds of 230 kilometers an hour.

The Observatory's super typhoon status is given when wind speeds exceed 185 kilometers per hour.

Both land and sea warnings have been raised, while "torrential rain" was forecast for the capital Taipei and 14 other counties by the weather bureau, a category which means at least 350 millimeters will fall within 24 hours.

The defense ministry said it had readied 100 shelters that can accommodate more than 45,000 people while around 35,000 soldiers were placed on standby for disaster relief.

Fishing boats returned to harbors along the coast as the storm approached.

"Although it won't have the same effect of Typhoon Morakot, this typhoon is still very well developed," Taiwan's Premier Mao Chi-kuo said Thursday, referring to a storm that killed 600 people in 2009.

Vegetable prices rose ahead of the typhoon on fears of crop damage, local media reported.

More than 32,000 fishing boats had returned to port by mid-morning Friday in China's densely populated Fujian province, authorities said, after they were ordered back to shore ahead of Soudelor's forecast landfall on Saturday night.

It is expected to bringing heavy downpours and strong winds, China's National Meteorological Center said in a statement.

Residents will be evacuated according to the weather conditions, the provincial flood control office added.