Typhoon Churns towards China after Killing Five in Taiwan 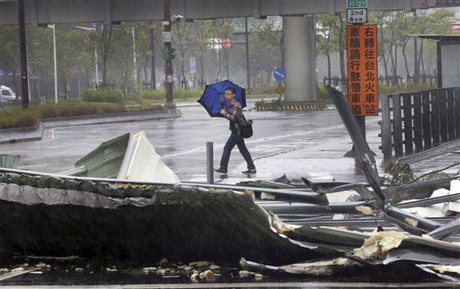 Typhoon Soudelor moved towards China on Saturday, weaker but still packing a punch, after killing at least five people and leaving a trail of destruction in Taiwan.

The typhoon ripped up trees and triggered landslides in Taiwan, and knocked out power to 1.5 million homes. Rivers broke their banks under torrential rain and towering waves pounded the island's coastline.

In mainland China, which faces Taiwan across a narrow strait, at least 250,000 people have been evacuated from the coastal provinces of Fujian and Zhejiang ahead of the typhoon's arrival which is forecast for Saturday evening.

"The tap water has stopped. The electricity is out. I’m hiding at home and scared to go outside," housewife Pan Danyun, who lives in Fujian's Fuzhou city, told AFP.

Taiwanese authorities said five people had died in the storm including a firefighter in southern Pintung county and a man in the coastal town of Suao who was hit by a falling billboard.

An eight-year-old girl and her mother had become the first fatalities when they were swept out to sea and died as the storm approached on Thursday. The dead girl's twin was also missing in the same incident, while another nine-year-old girl was injured but survived.

Dramatic images showed an elderly man who was buried up to his waist in another mudslide being hauled out by emergency workers in the picturesque hot spring area of Wulai, just outside the capital Taipei.

Another man, aged 83, died after being buried in the mudslide.

There were also unconfirmed reports of another death in southern Kaohsiung, where a man was said to have been hit by a falling tree.

One mountain village in Taiwan's northern region of Taoyuan was left almost submerged in mud.

"Flash mudslides surged into the village. About 10 of the homes were half buried but people were evacuated last night and are in safe shelters," a spokesman for the Taoyuan fire agency told AFP.

Tatung township in eastern Yilan saw the most rain, with more than a metre (40 inches) falling since Thursday.

"I've never seen such a powerful typhoon in my 60 years of life," one elderly woman in eastern Taitung told Formosa TV.

China's National Meteorological Center (NMC) predicts Soudelor will make landfall on Saturday evening in Fujian, somewhere in a band roughly between the cities of Fuzhou and Xiamen.

Late Saturday afternoon, the typhoon was still around 125 kilometers (80 miles) from Fujian, it said.

"When it makes landfall in Fujian, it will be significantly weaker, basically the strength of a typhoon or severe tropical storm," the government agency's chief forecaster Qian Chuanhai told state television.

But Soudelor was still packing winds of up to 144 km per hour (89 mph) as it crossed the strait between Taiwan and mainland China.

Billed as the biggest typhoon of the year earlier in the week, Soudelor -- named after a legendary Micronesian chief -- has since weakened.

Although authorities had warned it might strengthen before it hit Taiwan, wind speeds near its center remained at 173 km per hour (108 mph) as it made landfall early Saturday.

But Chinese authorities are taking no chances. More than 300 trains linked to Fujian have been cancelled, while China's three biggest airlines have also scrapped more than 60 domestic flights.

Fujian and Zhejiang provinces had ordered nearly 60,000 fishing boats to return to port, according to local officials.

The typhoon has already dumped more than 200 millimeters (8 inches) of rain in just over 24 hours in some areas along China's eastern coast.

Chinese forecasts show it moving inland to the central province of Jiangxi after making landfall.

"Soudelor will continue to deteriorate as it makes a final landfall in China," the U.S. military's Joint Typhoon Warning Center said. "As the system tracks further inland it will erode rapidly."