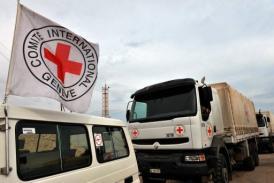 Seven pro-government activists were heading to Yemen's main southern city of Aden on Monday as part of a prisoner swap overseen by the International Committee of the Red Cross, rebel officials said.

The seven activists belong to the Southern Movement, whose militants were locked in deadly battles with Shiite Huthi rebels, who they helped to push out of Aden in mid-July.

They will be exchanged for seven Huthi militiamen, the officials said.

The activists will depart with ICRC head Peter Maurer from the rebel-held capital Sanaa aboard a Red Cross plane, according to an AFP photographer who saw the prisoners at the airport.

Aden was the scene of deadly battles between local loyalist forces and rebels who entered in March, days before a Saudi-led coalition launched an air war against the Huthis and their allies across Yemen.

Mauer arrived in Sanaa Saturday at the start of a three-day visit to assess the "dire humanitarian situation" in the country.

The United Nations says nearly 4,000 people have been killed since March, half of them civilians, while 80 percent of Yemen's 21 million people are in need of aid and protection.

The ICRC says 1.3 million Yemenis have been displaced by the conflict.