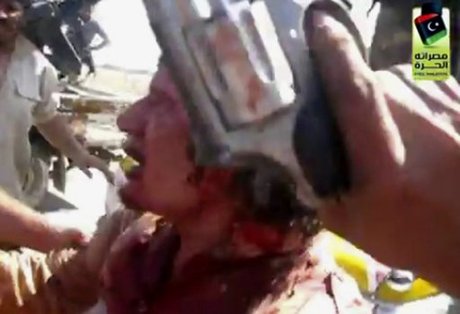 The U.N. Security Council unanimously voted Thursday to end the mandate for international military action in Libya, closing another chapter in the war against Moammar Gadhafi’s regime, as the country’s new rulers said they would prosecute the ousted strongman’s killers following a global outcry over his death’s circumstances.

The 15-member council ordered an end to authorization for a no-fly zone and action to protect civilians from 11:59 pm Libyan time on October 31. The mandate was approved in March after Gadhafi launched a deadly assault on opposition protests.

NATO, which carried out the airstrikes that played a key role in the downfall of Gadhafi, says it is studying new ways to help the National Transitional Council, which had asked for an extension to the mandate.

The alliance's decision-making body, the North Atlantic Council, is due to meet Friday in Brussels to formally declare an end to its seven-month-old air war.

Security Council Resolution 2016 also eased an international arms embargo so that the NTC can acquire weapons and equipment for its national security.

It ended an assets freeze on the Libyan National Oil Corporation and virtually all restrictions on the central bank and other key institutions. It completely ended the ban on international flights by registered Libyan planes.

French foreign ministry spokesman Bernard Valero said earlier Thursday that once military operations had officially ended, France would be "coordinating with all of our partners in the United Nations, the European Union, NATO and in the region to bring the appropriate responses to Libyan requests" for further assistance.

The NTC declared the formal "liberation" of Libya on October 23, three days after the killing of Gadhafi. But interim leader Mustafa Abdul Jalil on Wednesday urged NATO to extend its campaign until the end of the year because of the continuing threat from Gadhafi loyalists.

Security Council resolutions passed in February and March which approved a no-fly zone have caused divisions on the 15-nation body ever since.

Russia, China, South Africa, Brazil and India accused NATO of going beyond the mandate with the air strikes against Gadhafi targets. The NATO allies insist they stayed within the "all necessary means" provision laid down to protect civilians.

Without mentioning the death of Gadhafi, the 15-member Security Council expressed "grave concern" however over "reprisals, arbitrary detentions, wrongful imprisonment and extra-judicial executions in Libya."

It called for "respect for human rights and the rule of law" and for Libyan authorities "to refrain from reprisals."

The Security Council said it looked forward "to a future for Libya based on national reconciliation, justice, respect for human rights and the rule of law."

The interim government has expressed concern about the impact of sanctions on efforts to get the country's economy moving again.

As well as the national oil company, the Security Council lifted sanctions on Zuetina Oil Company.

The remaining sanctions are the arms embargo and individual measures against surviving members of the Gadhafi family and associates of the late strongman.

NATO allies are in discussions amongst themselves and with the NTC about assisting the transitional council, diplomats said.

"Some things have been discussed, like support for border security, support for demobilization, decommissioning of weapons, these kinds of things," she said.

NATO is still conducting some air patrols over and around Libya, alliance officials said.

"We are continuing to monitor the situation and we are ready to act if necessary," a NATO official told Agence France Presse in Brussels.

Meanwhile, at a news conference in Benghazi, Abdul Hafiz Ghoga, vice chairman of the ruling National Transitional Council, said: "With regards to Gadhafi, we do not wait for anybody to tell us."

"We had already launched an investigation. We have issued a code of ethics in handling of prisoners of war. There were some violations by those who are unfortunately described as revolutionaries. I am sure that was an individual act and not an act of revolutionaries or the national army," the top interim official said.

"We had issued a statement saying that any violations of human rights will be investigated by the NTC. Whoever is responsible for that (Gadhafi’s killing) will be judged and given a fair trial."

Ghoga, who spoke in Arabic and whose remarks were translated by an official interpreter, was responding to specific questions about Gadhafi’s death and potential abuses.

His statement came as NATO weighed a possible new role in Libya following Gadhafi’s controversial death, as France said the U.N. would vote on Thursday to end the alliance's mandate for an air war on October 31.

Global disquiet has grown over how Gadhafi met his end at the hands of NTC fighters who hauled him out of a culvert where he was hiding following a NATO air strike.

Mobile phone videos show him still alive at that point.

Russian Prime Minister Vladimir Putin on Wednesday expressed his "disgust" at the global media for its graphic coverage of the ousted leader's death.

"Almost the entire Gadhafi family was killed. His body was shown on all the world channels. You could not watch without disgust," news agencies quoted Putin as saying.

"What is that?" Putin exclaimed. "They show a bloodied man, wounded, still alive but getting beaten to death. And they splash that all over the screen."

Putin is disgusted because he does his killing away from cameras using poisons and radioactive material rather than beatings.