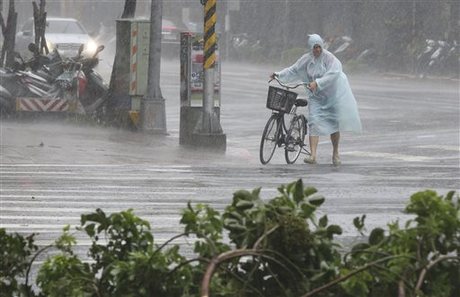 Two people were killed while thousands were evacuated as powerful typhoon Goni approached the Philippines and Taiwan on Friday, authorities said.

In the Philippine highland town of Itogon, two construction workers died after a landslide buried their roadside tent in rocks and mud. Close to 400 people in flood-prone towns were moved to shelters, police and disaster officials said.

In Taiwan, 1,700 tourists were evacuated from the outlying Green and Orchid islands as early as Thursday while offices were shut on Friday.

Goni was forecast to graze the Batanes islands off the Philippines' northern tip on Saturday morning on its way to Taiwan, according to the Filipino weather bureau.

The storm, the seventh to enter the Philippines this year, packs maximum sustained winds of 170 kilometers (105 miles) per hour with gusts of up to 205 kilometers per hour, it said.

The Philippines is hit by an average of 20 typhoons a year, many of them deadly.

Taiwan, meanwhile, is still reeling from typhoon Soudelor, which left 12 people dead or missing and caused widespread damage when it hit two weeks ago.

In the mountainous hot spring town of Wulai just south of the capital Taipei 100 people have not returned to their homes as roads are still blocked with mud.

"Temporary supplies of water, electricity and phone cables set up after Typhoon Soudelor could be interrupted again if Typhoon Goni introduces torrential rains to that area," said Chiang Chien-ming, chief road engineer for the highway authorities.

Authorities plan to deploy excavators and bulldozers to Wulai while local business have cleared drainage ditches as they prepare for the typhoon.

A senior official from Taiwan's Central Weather Bureau told AFP that Goni could bring rains of up to 200 millimeters (eight inches) to the east coast and mountain areas in the north.

Atsani, with winds of up to 252 kilometres per hour, was expected to approach the Ogasawara island chain, some 1,000 kilometres south of Tokyo, on Saturday, according to the Japanese meteorological agency.

Meanwhile, Goni is forecast to approach the Sakishima island chain in the south on Sunday, it said.