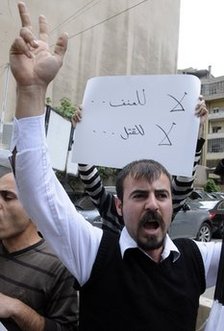 “The abducted Syrians are the two brothers Yassine and Mustafa al-Sahn and Issa Saleh, who were kidnapped from their residence place in the Bir Hassan area in the Lebanese capital Beirut and taken to an unknown destination,” the BBC’s correspondent in Beirut quoted the source as saying.

The kidnap operation is part of the recent abductions of Syrian activists in Lebanon, the source added.

“A brother of the two abductees filed a report with the Internal Security Forces about the kidnap of his two brothers and the third person,” the source said.

For its part, Voice of Lebanon Radio (100.3-100.5) reported that “members of a local party kidnapped three Syrians in Bir Hassan.”

“When Syrian national Idriss al-Sahn, 30, returned overnight to his house in the Bir Hassan district, behind Al-Bashair radio station’s building, his neighbors informed him that members of a local party in three black SUVs and a van had abducted his two brothers Mustafa, 24, and Yassine, 26, and their friend Issa al-Saleh, 26, taking them to an unknown destination,” VOL said.

In an interview with MTV, Idriss said: “Hizbullah told us that they are not in its custody and my brothers are not politically active.”

“I don’t accuse the party of being behind the incident,” he noted.

The TV network said the abductors did not use violence in the operation, adding that they had arrived at the scene in vehicles with no license plates.

poor lebanon, of course people will agree with a party abducting people as something normal...
i wonder what our patriotic M8 people would say if M14 abducted iranians in lebanon....

our brave lebanese army is not corrupted
only very few officers well known, and well covered by yarze, the regime in syria will never succeed to transfer his criminal civil war to lebanon despited his promisses to army chief to make him president after lahood and sleiman, the late was accepted by the international community and was made a resident of baabda.
kahwaji understood very clearly that the country needs a president not just a resident in the "palace".
just some patience, we are better day after day, they are beginning to be nervous, its clear.
BILAD EL ARZ WILL PREVAIL.

Hizbullah mistakenly thinks that it can win a civil war in lebanon.. the region is changing fast and everyone will have weapons in another year.. unfortunately hizbullah will bring more death and destruction upon lebanon... we might witness the rise of a suni fundamentalist military group in the North in a year's time.

All eyes are on the Syrian ambassador for doing kidnappings, so they turned to their paid for mafia to start the kidnappings.

And they still say there is no connection between Hizbollah and Syria? Really? I have been seen responses lately where someone's comments are removed off the site because they allegedly include curse words when they did not.

Is Lebanon (or has it already happened) turned into a mini Syria where freedom of expression is gone and only pro-Syrian comments are kept on the site? At least until now, both March 14th & March 8th have been able to express their opinions freely but it seems now that censorship is removing anything that even remotely is not pro current government. If that is the case then shut the site down because it would be then be worthless.

One day, Hezbollah will be judged and the sentence will allow every Lebanese to move on and leave its darkest hours behind. one day...

This is great News its about time Syrians finally know how it feels or there Fathers,mothers,sons and daughters to be kidnapped Praise be to God that this continues for another 100 years.Thank you

i'm pretty sure lebanon's clock is ticking.. surely it can't remain this calm for another year?

How could this happen when we have the guardians of the revolutions and the revolutionaries: Gabby, peace, thepatriot, realist, slash and tonyfarris on watch 24/7? This is unacceptable, and I will only blame Naharnet, where they spend all of their useless time these 3anater pussycats.

This was habal amels unit....they were busy last night roaming the streets of Beirut for these innocent Syrians, where is Basil and the Government?????

Looks like we all need militias now in order to protect ourselves since the gvt in wonderland ..