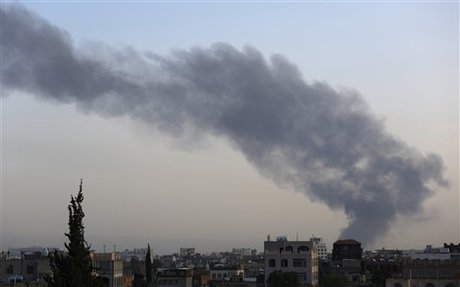 A gunman killed two Yemenis working for the International Committee of the Red Cross in the war-torn country Wednesday, the aid group said, condemning the attack as "appalling" and "brutal."

The attack appeared to be deliberate as the pair had been traveling north of the capital Sanaa with two other colleagues in vehicles "clearly" marked with the Red Cross emblem, said the Geneva-based ICRC.

"Sadly, two of our staff were brutally killed on their way back from Saada to Sanaa," spokeswoman Rima Kamal said, referring to the northern stronghold of Shiite Huthi rebels who have been battling loyalists of the exiled president.

Kamal said the unidentified gunman opened fire on the two vehicles after stopping them in Amran province, which has been under the control of the Iran-backed Huthis since last year.

"One of our colleagues passed away on the spot while another sustained critical injuries and was transferred to an MSF (Doctors Without Borders) hospital... where he passed away shortly after," she told AFP.

The two others were unharmed.

The head of the ICRC delegation in Yemen, Antoine Grand, said identified the dead as a field officer and a driver.

"The ICRC condemns in the strongest possible terms what appears to have been the deliberate targeting of our staff," Grand said in a statement.

"It is premature for us at this point to determine the impact of this appalling incident on our operations in Yemen."

But ICRC spokeswoman in Geneva Sitara Jabeen said that "after this incident we have stopped all our movements in the country for the time being."

The ICRC said it was not immediately clear who carried out the attack, noting there had been a number of security incidents involving the organization in recent months.

On August 25, the ICRC said it had suspended its operations in Yemen's second city Aden after gunmen robbed its main office while holding staff at gunpoint.

The organization has stepped up its relief activities in Yemen since the rebels entered Aden in March prompting President Abedrabbo Mansour Hadi to flee to neighboring Saudi Arabia, which has led a military intervention to restore him to power.

The ICRC says it provides vital humanitarian support to hundreds of thousands of people in need across war-ravaged Yemen.

Coalition warplanes also hit the rebel-held Dailami air base in Sanaa as well as the international airport, they said.

The city is a target for rival forces as it is seen as key to controlling Sanaa, which the Huthis overran a year ago.

Witnesses also reported other air strikes on a rebel-held army base in Taez, the airport, and a road linking Taez to Aden.

Hadi's loyalists have since mid-July recaptured Aden, and four other southern provinces, but security in the battered southern port city remains fragile.

In a statement on the government's Sabanew.com website, Aden's security chief General Mohammed Musaed said authorities had put in place a "comprehensive security plan to strengthen security and stability" in Aden, in coordination with countries taking part in the coalition.

Al-Qaida militants were accused last month of blowing up a building used by the secret police.

They also set up checkpoints in one district and seized five buildings including an intelligence services facility, a presidential residence and a military hospital, security officials had said.