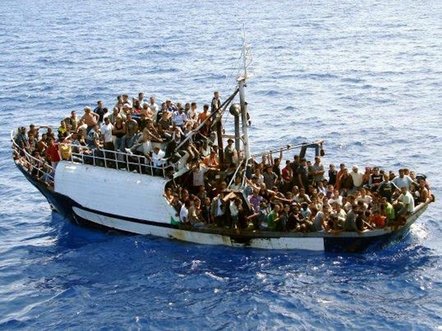 Rescuers in Cyprus on Sunday saved more than 100 refugees fleeing the war in Syria after their boat ran into trouble overnight off the Mediterranean island, authorities said.

The 114 people, including 54 women and children, had been aboard a small fishing boat about 40 nautical miles from the southern Cypriot port of Larnaca at the time they struck trouble, said a source in the island's Joint Rescue Coordination Centre.

The boat had departed from the Syrian port town of Tartus and stopped in Tripoli, in northern Lebanon, authorities said.

Interior Minister Socrates Hasikos told reporters the refugees had been headed for Greece, with some hoping to travel on to other parts of Europe.

He said police had arrested three people who were being questioned in connection with the incident.

Local newspaper Phileleftheros reported that the boat's captain was among them.

The boat was mainly carrying Syrian refugees, but also some Lebanese and Palestinians from Syria, Hasikos said.

Cyprus, a member of the European Union, lies just 100 kilometres (60 miles) off the Syrian coast but has so far avoided a mass influx of refugees from the country's conflict, with most preferring to bypass the island to reach the European mainland.

The boat's captain sent a distress signal late on Saturday night as the vessel was listing because its engine stopped working, prompting the police and army to launch a rescue operation, authorities said.

All of those on board the stricken vessel were safely brought ashore to Larnaca by 7:00 am (0400 GMT) on Sunday, police said.

Some of them received first aid at the port, but "there were no serious injuries warranting a transfer to the hospital," the interior minister said.

Phileleftheros reported that those rescued said they had paid more than $4,000 each (about 3,600 euros) to be taken to a "European destination".

Police said the refugees would be taken to a reception centre on the outskirts of the capital Nicosia later on Sunday.

Last September, some 345 Syrian and Palestinian refugees were rescued by a cruise liner in stormy waters off the island's coast and housed for several months before their camp was closed.

Two months later, about 220 Syrian refugees crammed onto a fishing boat were rescued off the coast of Turkish-occupied northern Cyprus after hitting rough seas.

Europe has been facing an unprecedented influx this summer of people seeking refuge, many of them from war-torn Syria.

The U.N. refugee agency says more than 2,500 people have died trying to cross the Mediterranean this year, many of them Syrian refugees desperate to escape their country's four-and-a-half year war.