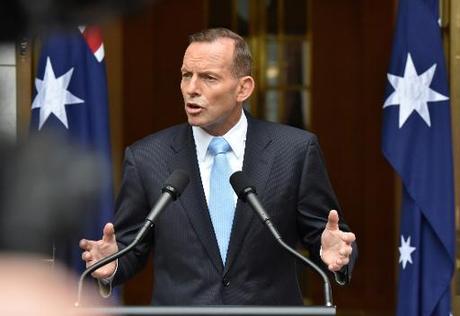 Australian Prime Minister Tony Abbott on Wednesday bowed to pressure to increase refugee numbers in the face of the Middle East crisis and confirmed Canberra will also join U.S.-led air strikes on the Islamic State group in Syria.

With his hardline against asylum-seekers under intense scrutiny given the drama unfolding in Europe, Abbott said the government was acting "with our head as well as with our heart" to help the thousands of migrants fleeing the conflict.

"All of us were shocked as a nation at the disaster that we saw on our television screens," said Abbott, whose own Liberal Party members had called on him to take more refugees after the image of drowned boy Aylan Kurdi resonated around the world.

"And all of us as a nation wanted to help."

Abbott said it was obvious that many Syrians would never be able to return to their homes as he announced Australia would take an additional 12,000 refugees from the Syria-Iraq conflict.

"This is an important and generous act by Australia," he told parliament of the one-off measure he said would begin as soon as possible.

"I stress that we are taking people who are persecuted minorities. We are determined to prioritise women, children and families on the borders of Syria in Turkey, Lebanon and Jordan."

The government will also pay to support more than 240,000 displaced people in countries neighbouring Syria and Iraq, funding food, water, healthcare, and other supplies, at an expected cost of Aus$44 million (US$31 million).

The prime minister said both the humanitarian response and the stepping up of military measures against the Islamic State group into Syria were in the national interest.

Australia, which is already part of the coalition fighting IS in Iraq, said the legal basis for extending air operations into Syria was the collective self-defence of Iraq as the group did not respect state borders.

"Destroying this death cult is essential, not just to ending the humanitarian crisis in the Middle East but also to ending the threat to Australia and the wider world," Abbott said.

Australia raised its terror threat to high one year ago and officials have long been concerned about nationals travelling to fight alongside IS or attempting attacks on home soil.

"We cannot defeat Daesh in Iraq without defeating Daesh in Syria too," Abbott said, using thw Arabic acronym for the violent jihadists who control swathes of Syria and neighbouring Iraq.

But the focus of the campaign would be on IS, and not the Assad regime, "evil though it is", he added.

-- The people have spoken --Rights groups welcomed the increase in refugee numbers -- which comes just days after Abbott said the cap on humanitarian visas would not be lifted from the annual rate of 13,750 -- but again called on the government to soften its migration rules.

Sister Brigid Arthur, acting chair of the Australian Churches’ Refugee Taskforce, said that people had spoken up in the face of the Syrian crisis and the government had listened.

"I prayed that Australia would open its hearts and its doors to people facing the greatest need for protection," she said, calling on Canberra to free other Syrians held in immigration detention.

Australia refuses to resettle refugees who try to come to the country by boat and has a policy of turning back asylum-seeker boats, detaining refugees in Pacific camps and denying them resettlement in Australia even if they are found to be refugees.

Amnesty International also welcomed the extra refugee places but noted that the few Syrians who had made it to Australia so far had been languishing for two years in a detention center in Papua New Guinea.

Australia's decision to expand military operations follows France's announcement Monday that it would begin surveillance flights over Syria to lay the groundwork for striking IS targets.

Other nations involved in the U.S.-led campaign in Syria include Bahrain, Canada, Jordan, Turkey, Saudi Arabia and the United Arab Emirates.

They won't take any piece... unlike the gulf countries, Australia doesn't get militarily involved without also taking in refugees. How many refugees have the gulf countries taken in? that is the biggest scandal! The neighbouring rich countries that contribute to the destruction of syria but don't take in any resulting refugees!

90% of the 4 million Syrian refugees outside of Syria are escaping the ISIS and/or Al Nusra allied controlled ares or battle zones! The other 6 million internally displaced Syrians refugees are taking refuge in Syrian government controlled areas! What is the reality of these undoubtable facts? More than half of Syria is occupied by foreign barbarians not seen on this scale, since the Monguls or Huns!