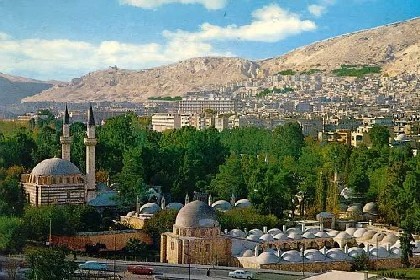 At least three Russian military transport planes have landed in Syria in recent days, U.S. officials said Tuesday, as Washington worries about the sort of assistance Moscow is providing to Damascus.

The aircraft have landed at the airport in Latakia on Syria's Mediterranean coast over the past several days, U.S. officials told Agence France Presse on condition of anonymity.

Two of the aircraft were giant Antonov-124 Condor planes and a third was a passenger flight, one of the officials said.

The Russians have installed modular housing units -- enough for "hundreds" of people -- at the airport, as well as portable air traffic control equipment, the official noted.

"All of this seems to be suggesting that Russia is planning to do some sort of forward air-operating hub out of this airfield," the official said.

Washington has expressed concern following reports suggesting Moscow may be boosting military support to Syrian President Bashar Assad and had sent a military advance team to the war-torn country.

"Our concern would be that any effort to bolster the Assad regime right now would potentially be destabilizing," Pentagon press secretary Peter Cook said Tuesday.

Syria has denied reports of increased military activity by Russian troops on its soil.

U.S. Secretary of State John Kerry called his Russian counterpart Sergei Lavrov over the weekend to warn of the dangers of stoking a conflict which has already cost nearly 250,000 lives.

Russia rejects the charge, insisting that any deliveries are in keeping with its traditional links to long-time ally Assad.

Bulgaria has refused permission for Russian aircraft to enter its airspace, and Greece said Tuesday that Washington had asked it to also deny Russian overflights.

Good, Russia seems to take the fight against terrorism more seriously than the Western world.

In order for the Russia to fight terrorisem more seriously they should come to your "heaven" as well.

Just a quick question about the picture of you and your boy friend, who is the quarterback and who is the wide receiver?

US worries that Russia sends support to the Syrian army, because it threatens the situation of the terrorist pawns they trained and armed... US is fearing for their investment

This isn't surprising at all since Russia has on many occasions sent some of its Antonov planes full of cargo such as sustenance and medication.

Nobody would deny the fact that the Russian Federation provides weapons to Syria, but this event is not such a case. It is rather a reactionary piece of news that has become a trend since US sanctions on the RF.

Takfiri.boy why do you keep denying your full support to Wahabism?

Pajama boy... As much as the west allows Turkey to have any military power, before the self imposed caliph Erdagon took control, they can just as easily take it away! The turkish PM describing Europe as a hypocritical christian enclave that hates muslims, was the final wake up call to this turkish government. They are the ones, that that poor little kurdish boy and his family were trying to escape from! For decades now, the turks have been allies of the west and within 10 years this alliance is being destroyed by the Caliph Erdagon! All you ignorant and naive losers should wake up if you think you can challenge the whole Western world!

even china is not that stupid to take on the west and Russia! What the hell is turkey and the stupid oil camel arabs?

The key question right now is what is the neighbor south of the border thinking:-) I am sure we have not heard the end of it!

Turkey will take down Russian planes? Man you are so delusional! Russia would fart and destroy turkey!