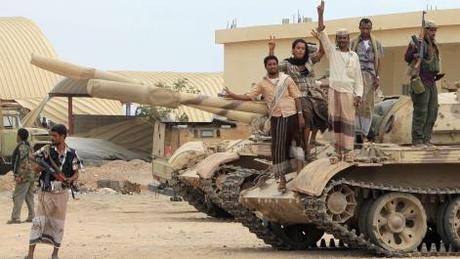 "Twenty civilians were killed and dozens wounded" in the attack, a medical official said. Witnesses said the provincial capital's market was targeted.

The attack came hours after a Saudi-led coalition air strike killed seven rebels in Marib, where Apache helicopters have also joined the fight against Huthi Shiite insurgents and their allies.

The UN estimates that more than 4,500 people have been killed in the Yemeni conflict since March.

I thought the sa3oodis had to hire mercenary troops to fight in Yemen, how come?

they tried to hire but they knew their fates....

Mystic - any outrage from your side?

Outrage why? They should bomb them into oblivion.

7 minutes ago NNA: A Bangali maid was rushed to hospital after she threw herself from the third floor of her shiaa employer's house in Haret Saida.

11 minutes ago AFP: 20 individuals died in rebel rockets that hit a market in Yemen's Marib.

The huthis should be tried for war crimes.

Today is the President's birthday, my bashar! I made a cake and "asma bil 3asal" and we will celebrate houbbi's birthday at Idlib's air force base;)

FT, mowaten, younis, giveittoyou, and I are the 5 most informative posters on naharnet by 5 country miles. No wonder our comments are always in the VIP section of the top rated comments. No wonder..

just like their hizb in Lebanon, all they know is how to kill babies, women, and civilians.

where did you see KSA media....! The article is by Source Agence France Presse.

you see, bigjohn after visiting tartous every january and talking to Most Syrians and Most sunnis he stops by in Sanaa and Marib and he talks to Most yemenis about cluster bombs and KSA misleading media fabrications.

".Southern_. 3 days ago
Ansarullah are responding by hitting the military positions exclusively, although they have means to hit inside KSA sites; this is the difference between the wahhab-al-qaeda mentality and the freedom fighters... the Freedom Seekers always win no matter how much it will take."

relax, 1anonymetexasusa. this is war, and in wars, people in markets and bees die. The sa3oodis launched an insurgency and was swiftly contained. A few beekeepers and market shoppers aint what one qualifies as 'a massacre'. most are the bodies of the slain sa3oodis. of course children die as well, in wars, anywhere so no need to over-dramatize it, habboub.

15 minutes ago The Saudi civil defense said 52 people were killed when a crane crashed into Mecca's Grand Mosque.

lies lies! It was the will of Allah and Sayyedna Al Hussein that caused this as revenge against the Wahhabis.
Lan Tousba Zainib Marratayn Lan!