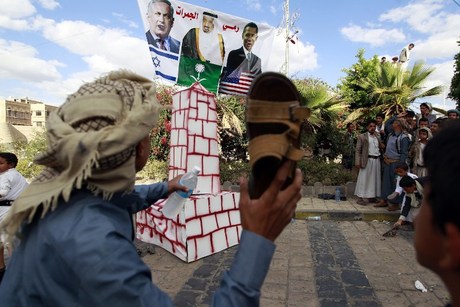 Hundreds of rebels protested Friday in Sanaa over claims that Saudi Arabia, home to Islam's holiest sites and host to the hajj, was denying Yemenis the right to attend this year's pilgrimage.

Dressed in the white shrouds worn by pilgrims and brandishing assault rifles, they shouted "No to politicizing the hajj."

"The next hajj will be by arms!"

Hundreds of thousands of people from around the world are gathering in the Saudi city of Mecca, home of the Muslim prophet Mohammed, for the five-day pilgrimage due to begin later this month.

The kingdom is leading a coalition that has been fighting in support of Yemen's exiled government against rebels in its southern impoverished neighbor.

Talal Makki, manager of an agency in Sanaa which organizes pilgrimages to Saudi Arabia, told AFP the kingdom has so far denied entry to Yemeni pilgrims "due to security issues, and we are waiting for a royal decision allowing them to enter."

Makki said his agency has received applications from 20,000 people wanting to perform hajj.

During weekly prayers Friday in rebel-held Sanaa, clerics condemned Saudi Arabia's "use of hajj... to obtain political gains... which contradicts all teachings of Islam."

The Shiite rebels, allied with troops loyal to former president Ali Abdullah Saleh, seized the capital a year ago before pushing south and driving the government into exile.

That prompted Saudi Arabia to launch an Arab coalition that is fighting to regain the lost territory.

All able-bodied Muslims who can afford it are expected to make the pilgrimage at least once in their lives.