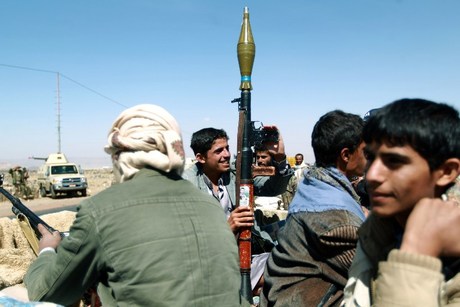 They targeted arms depots and military camps in the rebel-held capital's northern districts.

They also struck the rebel-held presidential residence in Sanaa's southeast and nearby arms depots, witnesses said, adding that warplanes were still overflying the city.

There were no immediate details on any casualties.

In the eastern Marib province, where the coalition has been focusing its operations in recent days, pro-government military sources said air strikes on two separate rebel convoys killed at least 23 insurgents.

AFP could not confirm the toll from independent sources, and the rebels rarely acknowledge their losses.

The reinforcements are being sent in preparation for an offensive to retake the capital, seized by the Shiite Huthi insurgents a year ago.

Meanwhile, the United Arab Emirates announced that it has now received the remains of all of its "52 martyrs" who were killed in a missile strike in Marib last week, according to the official WAM news agency.

The UAE had given an earlier toll of 45 of its soldiers lost in the attack.

Ten Saudis and five Bahrainis were also killed in the strike, claimed by the Iran-backed Huthi rebels.

The United Nations estimates that Yemen's conflict has killed more than 4,500 people since March.

On Thursday, the U.N. special envoy for Yemen, Ismail Ould Cheikh Ahmed, said the exiled government and rebels had agreed to take part in peace talks in the region next week.

However, in the absence of any announcement from the rebels, government spokesman Rajih Badi said he was unsure they would attend the talks, which he said will take place in neutral Oman without specifying a date.

The government of exiled President Abedrabbo Mansour Hadi confirmed it will join the talks but insisted that a rebel pullback from areas seized since last year -- as outlined by U.N. Security Council Resolution 2216 -- remained a precondition for negotiations.

The United States has welcomed the announcements.

Yemeni rivals held a round of fruitless U.N.-brokered negotiations in Geneva in June.